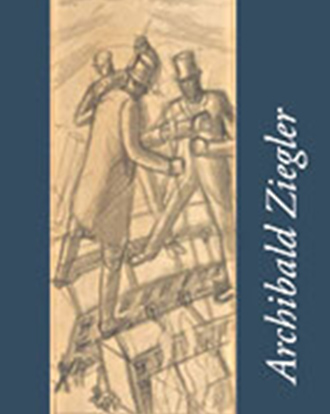 Ziegler was born in London in 1903 and studied at the Central School of Arts and Crafts. He subsequently (from 1927 to 1930) studied at the Royal College of Art under William Rothenstein, whom he recalled as a lively and inspiring Principal.
After leaving the RCA Ziegler taught drawing and painting at St. Martin’s School of Art (where he was a visiting instructor for Figure Drawing and Painting) and Art History at Morley College in London and for the Worker’s Educational Associa-tion. His work was widely reproduced in publications including Illustrated London News, Country Life, Architectural Review, Master Builder, Architecture Illustrated, Studio Artist, Courier, London Mercury Leader, Bookman and The Artist. His Royal Academy exhibits (which between 1931 and 1970 numbered 12) were mostly of his locality: Chelsea in the 1930s, Hendon and Hertfordshire in the 1940s and Hampstead from the 1950s onwards. In the final year of his life, 1971, Ziegler was given an exhibition at Kenwood House, London ñ the first living artist to be so honoured