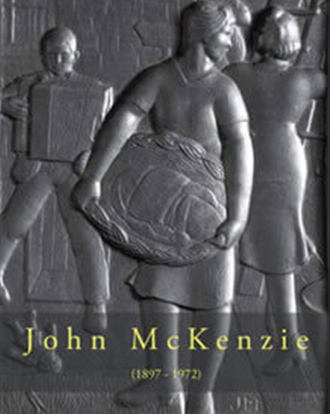 It is rare for a creative artist to work in the privacy of his garden shed, in a challenging medium, and almost entirely for his own pleasure, but such a one was the slate-carver, John McKenzie. His day job was working as a steward in the Petty Officersí Mess aboard H.M.S. Condor, the Fleet Air Arm Training School at Arbroath, Angus, on the east coast of ScotlandÖ. It has been said that sculptors can be divided into two categories – whittlers and modellers. McKenzie definitely falls into the former, as he was clearly never happier than with a knife or some other cutting or engraving tool in his hand; rejecting wood as too soft, perhaps too feminine, he sought for something more challenging and settled on Welsh slate, a hard and obdurate material. The small body of work he produced, probably not more than a hundred and fifty pieces in total, form a unique record of the dreams as well as the everyday genteel world of this working-class Phidias from Glasgow who, after his fatherís death, moved to Arbroath with his mother, living with her for the remainder of her life.