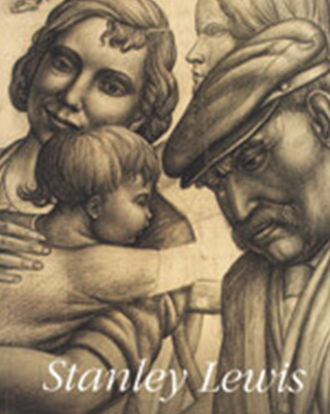 Stanley Lewis (1905-2009) was reluctant to sell his art during his life-time. He kept all his major works. He later gave some to museums. He turned down offers from galleries, preferring to work without constraints, choosing to eam a much needed regular income through teaching (over 10 years at Newport School of Art and 22 years as Principal of Carmarthen School of Art). His work is highly distinctive and he remained faithful throughout his life to a graphic and stylised manner developed early on in his career. Perhaps the most enduring aspect of his legacy is the remarkable cycle of paintings exhibited at the Royal Academy celebrating Welsh subjects: The Welsh Dresser, The Welsh Mole Catcher and The Welsh Farmer. Stanley also strongly identified with the land: on the one hand his calling to art was a vocation; on the other his approach was disarmingly unpretentious.

Stanley Lewis
Portrait of a Ploughman , circa 1936
Sold

Stanley Lewis
Still life with bottle of Ale, circa 1925
Sold

Stanley Lewis
Cartoon for Hyde Park c.1931
Back to Publications