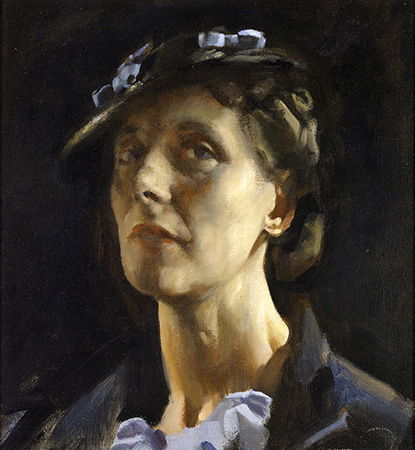 At a time when market forces are hungry for fresh blood, the rediscovery of forgotten talent is all the rage. However, it is often an excuse for serving up the second-rate with a side-dish of hogwash masquerading as curatorial critique.

Happily, the decision by the Scottish National Gallery of Modern Art to dust off nearly 100 canvases by British artists between the wars needs no defence. Its True to Life exhibition presents a tranche of art history that genuinely merits closer attention.

To all but connoisseurs, only a handful of these painters is familiar. Stanley Spencer is the headliner. Otherwise renown has been scattered only across Laura Knight, Edward Burra – who gained critical respect due to his affinities with Germany’s Neue Sachlichkeit movement – and the remarkable Winifred Knights, who leapt to prominence thanks to a Dulwich Picture Gallery retrospective last year. (The expertise of that show’s curator, Sacha Llewellyn, who has also co-curated True To Life, is responsible for much of today’s interest in this era.)

In its own time, British realism was both lauded and derided. The critic RH Wilenski railed against the “degenerate, romantic and … descriptive techniques of the nineteenth century.” Yet Henry Tonks, an influential professor at the Slade School of Art, described geometric abstraction as “obscene nonsense” and opined that to “try and find inspiration outside the experience of everyday life seems the sign of a feeble artist”.

Truly, the style embodied a paradox. On the one hand its lucidity made it the conservative cousin of European modernism, where the likes of Picasso, Mondrian and Kandinsky had overturned the old figurative tradition. Yet after the first world war, realism came back into fashion with the so-called “return to order” as artists including Picasso (again), Giorgio de Chirico and George Grosz embraced figuration with new enthusiasm. 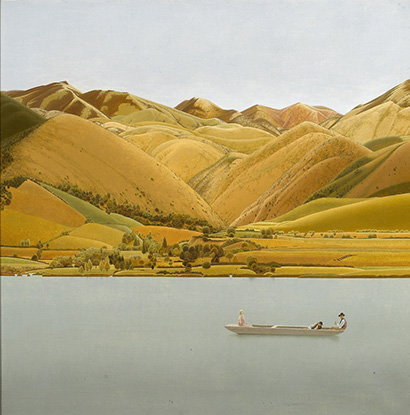 If the British realism of the period has looked weaker than its European counterpart, it’s because the UK never embraced the avant-garde in the first place. As a result, the UK’s postwar realists seemed to be serving up the “same old, same old” rather than genuine innovation. Nevertheless, the wind of change undeniably breezes through the opening gallery in Edinburgh. The centre-piece is Colin Gill’s “Allegory” (1920-21), a surreal, storm-threatened picnic scene that unfolds across an eerie, ebullient colour spectrum from fruity pastels to earthy browns and greys. Against Arcadian hills, the dumbstruck protagonists are oblivious to each other and to the bread on the cloth in front of them. Imagine Manet’s “Déjeuner sur l’herbe” with spiritual overtones, or a Last Supper given secular bite, and you have a sense of the chaste yet sensual spell Gill has cast on his diners.

The undisputed enchantress is Knights. Gill, who fell in love with her when they studied together in Rome, cast her in “Allegory” as the handsome, detached beauty holding a birdcage above a reclining nude and her lover. (He once penned a sonnet to Knights – a gift for imprisoning his heart in such a trap.) Knights was as seductive an artist as she was a woman (she eventually married the painter Thomas Monnington, of whom more later). Her masterpiece is “The Deluge” (1921), which belongs to Tate. On display in the second room, it’s a mystifying image whose subject – figures fleeing a flood – is rivetingly at odds with its atmosphere of frozen calm. Rearing waves, houses and people – especially the women’s broad skirts – are composed from the blank rectangles and triangles familiar from Suprematist abstraction; Knights’s hybrid idiom feels more genuinely contemporary than any other British artist of the period, including Spencer.

Italy provided a rich diet of imagery and ideas for the British realist brigade. The country’s treasures served not only for Gill’s Tuscan-pretty hills but also for the wood-smooth, white-limbed figures that people so many of these paintings. In a work such as “The Wine Press” (c.1923) by Thomas Monnington, the pristine spinal curve of the man bending to trample grapes echoes that of the figure shedding his shirt in the Baptism of Christ by Quattrocento master Piero della Francesca, while the baby nestled in a crib below the barrel references the same painter’s Nativity.

Artists who eschewed Italy’s neo-Platonic strand had to work harder. Portraiture, which occupies a generous gallery, flourished in interwar Britain as a growing clientele from aristocrats to statesmen and businessmen commissioned their own images for posterity. However, Gerald Brockhurst, despite borrowing the misty, steel-blue mountains beloved of Leonardo as a backdrop, falls on the sword of his own perfectionist technique. Bafflingly chosen for True to Life’s catalogue cover, his portrait “Dorette” (1933) ramps up his model’s glamour by contrasting her fuchsia lipstick with marble-smooth skin and gleaming mahogany curls but the result is as shiny and superficial as a B-movie starlet.

By contrast, John Bulloch Souter’s portrait of a woman in an interior, “The Day’s Arrangement” (c1930), boasts the glassy clarity of Vermeer and the spectral moodiness of Hammershoi. Reaching out one limpid hand to tweak a bouquet on a plinth, the model is a grave-cold, column-still beauty whose skirt, with its rippling waterfall of black satin and frothy lace sleeves, makes a sumptuous contrast to the calm, faceted rectangles of the stone-white door.

Yet British realism also served to highlight a world less privileged. An early instance is “A Scene in a Village Street with Mill-Hands Conversing” (1919), in which Knights arranges an informal semi-circle of pale, watchful figures in front of spartan factory buildings. The figures, who are mainly female, stare glumly at the encounter between a man and a woman, her scarlet cardigan the only flash of colour among the otherwise murky hues. Part feminist tract, part Visitation, the painting typifies Knights’s unnervingly original gaze.

Knights anticipates the wave of socialist art that came in the so-called “Hungry Thirties”. Spearheaded by communist painters such as Clifford Rowe, who spent time in the Soviet Union, this movement softened the bleak graphics that characterised Russian socialist realism. The customers in Rowe’s “The Fried Fish Shop” (1936), all sport the square jaws and broad shoulders that typify Soviet style, yet the painter’s gift for sloshing sky-blue shadows over white counters and tabletops in contrast to the sinister dark oblongs of the diners’ greatcoats gives his painting a mobile luminosity that transcends political rhetoric.

Across Europe, art was changed utterly by the second world war. The final room here contains two paintings which, in their grave yet unassuming humanity, feel like anticipations of the tragedy to come. One is Charles Spencelayh’s “Why War?” (1939), a Victorian-style portrait of an elderly, moustachioed ex-serviceman – his chest bears first world war ribbons – staring into the gloomy depths of his parlour next to a newspaper announcing Neville Chamberlain’s vain attempt to make peace with Hitler.

The other is “The Day War Broke out, Mom” (1939), Victor Moody’s portrait of his wife painted on the day that war was declared. Captured in profile to accentuate the coppery shadows pooling in the hollows of her neck, the woman glances sideways with an air of vulnerable alarm. She could be an elegy for an age in which European painters led the world. When the war ended, it was the Americans who would show the way forward.