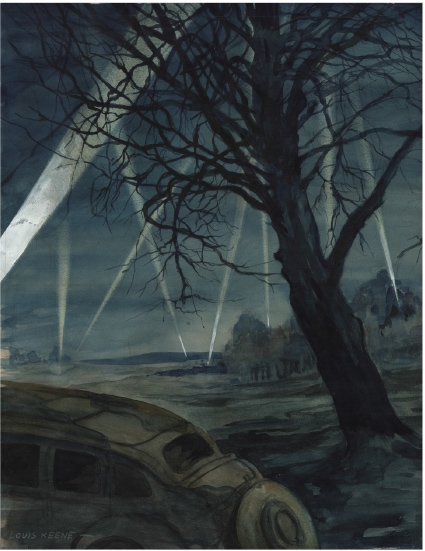 Louis Keene completed Alert near Aldershot during the Battle of Britain in 1940. Keene was commanding officer of the Lorne Scots during the Second World War and his war pictures were exhibited at a National Gallery show in May 1942. 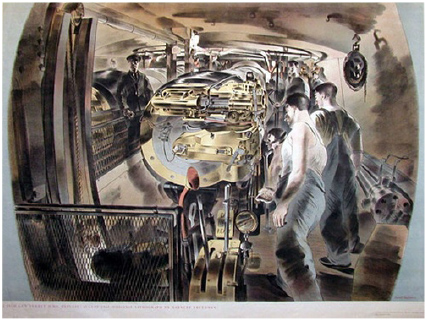 Barnett Freedman was one of the first artists to be commissioned by the War Artists Advisory Committee and was posted to France. The illustrator and painter was interested in recording operational methods. This proof lithograph, 15-inch Gun Turret, HMS Repulse, was finished in 1941.

Second chance to go into battle

“PEOPLE talk about the Second World War, their memories of fighting or the Blitz and there’s a huge amount of nostalgia around it. But it’s the art created around the First World War that most resonated with people.”

Paul Liss, co-founder of Liss Llewellyn Fine Art, is recounting how he grappled with the subject of his newest exhibition, WWII: War Pictures by British Artists, a show that has been 15 years in the making.

Following the success of his exhibition The Great War as Recorded in the Fine and Popular Arts of two years ago, the question for his new show was: how can we portray this very different war in a wholly new way?

The solution came from the same source as the exhibition’s namesake, the eight-volume War Pictures by British Artists, which recorded the work of the War Artists’ Advisory Committee (WAAC) – and which opportunely celebrates its 75th anniversary this year. The categories that divided the volumes provided the eight sections of the exhibition: war at sea, Blitz, RAF, army, women, production, soldiers and air raids.

The result of this work will be exhibited from October 28 to November 23 at the Morley College Gallery in Lambeth, a stone’s throw from the Imperial War Museum.

All the paintings in the exhibition have passed through Liss Llewellyn’s hands at some point. Liss estimates that 75% are pieces they acquired during the past decade and a half and purposefully held on to with a show such as this in mind. The other 25% are loan items from clients who have previously purchased the same work from the dealers.

The production of a catalogue is an integral part of the overall project. Part of the reason the firm has remained without a gallery, Liss explains, is to devote itself to the production of such books. The proceeds for any book sold during the course of the exhibition are then donated back to the institution that hosts the show, in this case Morley College Gallery.

Morley College will be staging a number of relevant talks during the exhibition, including one on the orchestras of Auschwitz by Leo Geyer and Lady Ester Gilbert, and another on Lambeth midwifery during the war by Robert Holden.

Liss Llewellyn devotes much of its time to curating exhibitions hosted in museum settings – after which it often carries out some low-key trading. WWII is unusual in being predominantly a selling show.

And this leaves the online gallery in an advantageous position, even compared to large museums.

“If a museum held a Second World War exhibition they would have to focus on the big names in order to bring in the required footfall,” Liss says. “The joy of this project is that it brings together the names of so many artists whose work is today unfamiliar to the majority of art lovers.” While some of the most familiar names (Dunbar, Ardizzone and Ravilious) are represented, less familiar artists also feature, such as Frank Potter, Michael Ford and Louise Keene. The result, Liss hopes, is an exhibition that is at once engaging and provides visitors with “a real sense of discovery”.

WWII War Pictures by British Artists is on display from 28 October until 23 November 2016 at Morley Gallery in London.

Sacha Llewellyn and Paul Liss have edited and published a catalogue and essay collection to accompany the exhibition.