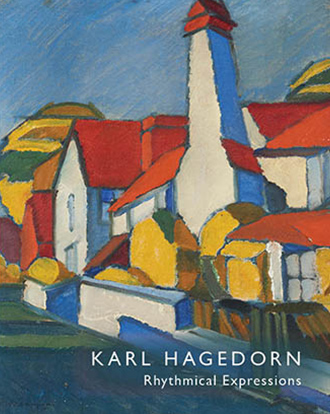 In many ways Hagedornís career both reflects and is part of wider tendencies in art, for example, in his retreat from radical modernism in the years following the First World War, which reflects the wider ëReturn to Orderí manifested in the work of artists such as Pablo Picasso, Andre Derain and Gino Severini on the continent, and artists such as Duncan Grant, Vanessa Bell and Edward Wadsworth in Britain. His watercolours of the 1920s encapsulate the search for solace in the landscape that appears in the work of so many others of his generation. These works have a distinctive clarity and call to mind Paul Nashís question of whether it was possible to ëGo Modern and Be Britishí. As an outsider, Hagedorn was not weighed down by such a sense of tradition. In the same period he was also designing eye-catching posters that patriotically called on their viewers to ëBuy Britishí (CAT. 41) applying the lessons of European modernism to commercial advertising for the Empire Marketing Board.

Karl Hagedorn
Design: A Self-portrait Rowing
£875.00
Back to Publications