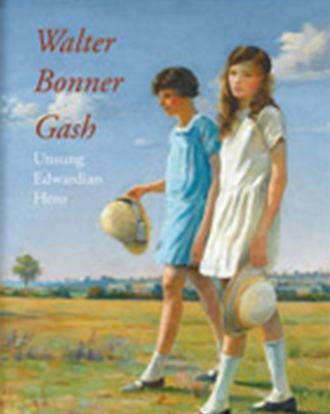 This is the first exhibition of Kettering-based artist Walter Bonner Gash since his death, some 83 years ago. While Gash’s ceuvre is full of the period charm that might be expected from the decades that bridge either side of the Edwardian era, his pictures consistently offer something more substantial. His genre paintings bring to mind those of Charles Spencelayh but they display a less predictable and less laboured narrative. As a landscape painter he painted en plein air with relish; he excelled in the medium of pastel. According to his daughter, portraiture was the genre he enjoyed most. His portraits are consistently striking, moving impressively from conversation pieces, such as I. elegant and engaging family group of c.1919, to the tradition of Swagger portraits which recall those of Gainsborough, Lawrence and Sargent. For an artist who died before he was sixty, it is striking that his most memorable images are amongst his last. It is hoped that Walter Bonner Gash: Unsung Edwardian Hero will firmly re-establish Gash’s reputation and demonstrate that his talent stands comparison with those of the better known Kettering artists.