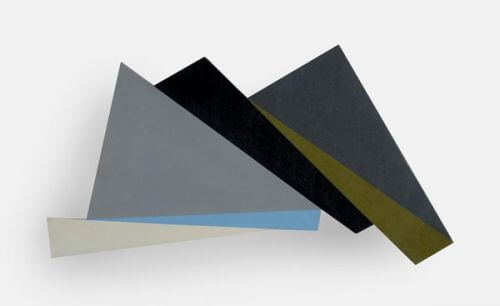 Canney’s earliest reliefs date to the 1960’s and were born out of  a Cubist-inspired interest in fragmented space.  From the 1980’s Canney increasingly worked in flat plains of colour, progressing eventually to pure fields of shallow uncoloured gesso.  The depth of this relief and strength of the colour fields echos the hard lines of his Alkyd paintings of the mid 80’s. 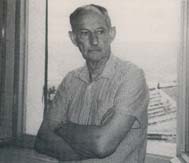 Painter, relief maker, writer, broadcaster and teacher, Canney was born in Falmouth, where he was taken to art shows from an early age. In the early 1940s he studied at Redruth and Penzance Schools of Art and St Ives School of Painting, under Leonard Fuller. After army service he studied at Goldsmiths College of Art, 1947-51, and then undertook postgraduate study at Patrick Allan-Fraser School of Art, Hospitalfield, Arbroath. In 1956 he was appointed curator of Newlyn Orion Gallery, and began broadcasting on radio and television. In 1964-65 Canney taught at Plymouth College of Art and then in 1965-66 was appointed visiting gallery director and lecturer at the University of California, Santa Barbara. From 1966 to 1983 he was on the staff of the West of England College of Art. In 1984 he moved to a village near Siena, Italy and continued to paint. In 1985 he scripted an award-winning documentary film for television on painting in Newlyn. He exhibited regularly at group exhibitions in Britain and abroad. His later one-man shows included Newlyn Art Gallery, 1983; Prescote Art and Design, Edinburgh, 1984; and Belgrave Gallery from 1990. Plymouth City Art Gallery and several other public collections hold his work.

Scott, Nicholson, Vaughan, Hilton and Lanyon were all friends of his. Canney was unusual amongst his contemporaries in so far as he was an indigenous Cornishman.

The 49 works in this show were produced by Michael Canney in the last 25 years of his life. The pictures come from the artist’s estate and represent the most significant group of his work ever to come on to the market. Canney was an innovator, and discovered the possibilities created by the invention of a new medium. Alkyd oil paint was developed in the 1930s and 40s for industrial processes which required special paint finishes. The addition of alkyd resin to oil paint gives more flexibility when dry and speeds up the drying process. This medium was to have a profound influence on Canney’s work in his later years. It allowed him to paint with a precision which is impossible with slow drying oils, laying contrasting tones adjacent to each other with no bleeding of colours, and to produce effects on the surface of the paint, with a variety of techniques, almost immediately after the paint had been laid down. The result is a stronger and more permanent work of art, less susceptible to damage as it dries and more durable when the process is complete.

Born in 1923 at Falmouth he was, from an early age, inculcated into the modern art movement in Britain, and in particular that of the West Country, where so many leading artists of the 20th Century were based. From his first experiences visiting exhibitions, his time serving in the forces in Italy, and on to his career as an artist he came into close contact with colleagues of the highest distinction and some of the greatest creative minds of twentieth century art: Giorgio De Chirico was an early influence and encouraged Canney to pursue his enthusiasm for art. Aged nineteen he met Ben Nicholson and Barbara Hepworth and was to collaborate with Hepworth on an open air exhibition at Penlee Park. He became friends with Roger Hilton, Patrick Heron and Peter Lanyon. In 1958 he met Mark Rothko who liked his work: they had a shared admiration for John Tunnard, whose work was then little known. Mixing in the artistic circles of the time he came to know William Scott, Robert Adams, Kenneth Noland, Helen Frankenthaler, Mark Tobey, Naum Gabo and Francis Bacon. These friendships and associations kept Canney involved with painters and painting. He lectured, wrote, made broadcasts and commented on the work of artists of his own time, and always sought new breakthroughs in his own work.

The earliest pictures in the show are from the 1970s and are painted in oil on canvas; they are, like all of his work from this time onward in the Constructivist tradition. The compositions are asymmetric, with clear blocks of colour, and the surfaces are smooth, even polished. In Composition with Red Angle (cat.12) the shapes are varied asymmetrical inventions, juxtaposed by the artist, with differing colours to form an intriguing yet stable composition. Similarly the painting Composition in black (cat.11) is a taut construction of interlocking forms made stark by the heightened contrast of the palette. In these two pictures, as in the other nine oils in the exhibition, the language is simple, an arrangement of many solitary colours to construct a composition on a single tone background. Canney’s inventiveness is clear and easy to appreciate and with great precision and painstaking technical ability he is working at the limit of his materials. In the late 1970s and early 80s Canney embarked on two new projects, the first of which he continued until the end of his working life. His paintings became concerned with formal geometric shapes, in particular the square, and he experimented not just with composition using these shapes, but deconstructed them, cutting, folding, peeling, unravelling and dividing, sometimes using numerical sequences such as Fibonacci, and often using common fractions such as ⅓, ¼, ¹⁄₅ , which he maintained were easily understood by the human eye. Between 1979 and 1983, to show his ideas to best effect, Canney used the second of his new projects, the white relief. The purpose of the minimalist, stark works was in his own words: ‘to master the simple in order to proceed to the complex. For example, the whiteness of the reliefs is not a search for purity or even for a simplicity of statement. White permits the element of relief to show most readily.’ As he progressed further with his analysis of the square and other shapes he was at the same time starting to use a paint type which would transform the variety and appearance of his pictures. His discovery and experimentation with alkyd allowed his vision and thoughts to come to fruition in a burst of creativity which lasts until he was finally forced to abandon painting due to ill health. Alkyd, or alkyd oil paint contains a resin which means that the medium dries quickly, or more accurately ‘sets’ or hardens. This happens in a matter of hours and allows blocks of colour to be laid down adjacent to each other without any danger of ‘run’ or mixing. The earliest dated works by Canney using this medium are from 1981 and include System with Circles No. 1 (cat. 30) which while exploiting the technical advantages has not quite departed from the earlier compositions. But with Four Plus Four Equals Two (cat. 19) we can see a new departure in the form of the composition. Canney first creates the composition in a white relief, and then realises the same idea using only four colour tones. From these early experimentations the work quickly takes on a third element, that of surface treatment, to produce scratched areas (Rotation No. II, cat. 8), rubbed areas (Construction, cat. 39), incising (Three Triangles, cat. 33), lifting of paint (Enveloping V, cat. 6), and that of delivering pigment into the grooves of paint already dried (Granite Village by the Sea, cat. 34). At this time he retired from lecturing on art, and he was invited to curate an exhibition of his recent work at the Newlyn Art Gallery in Penzance. In the catalogue notes Canney has chosen to describe the medium not as oils but as painted in alkyd.

With these new found possibilities, and his exceptional feel for colour, Canney started to create much more complex images, laying bands of colour over one another, he paints a third, fusing in his mind, and then on the panel the ‘resultant’ patch of colour. Each of these sections has been laid down independently, left to dry, and then the others filled in. At the same time as he paints these vibrant colourful pictures he also produces incised monotone pictures (Sgraffito 3, 4 & 5, cats. 25–7), these beautiful works echo his period of making white reliefs, where he ‘masters the simple to proceed to the complex’. In these compositions he takes his meditations on the square to a deeper level of analysis, no longer preserving the surface area, he uses only the outline, and when these are folded on themselves, and their corner angles are changed he reveals the possibility of an infinite number of permutations, while arranging the shapes on a muted ground of delicate sgraffito paint.

Michael Canney’s art developed throughout his life, but once he had adopted the Constructivist style he continued it. Experimenting with both composition and media, his work combines visual beauty and a love for materials, with a sharp intellectual study of form, geometry and balance. His own very particular style developed alongside some of the major names of the modern movement in British art. This comprehensive show of Canney’s work provides the opportunity to enjoy, and reassess his own contribution to 20th century British abstract art. 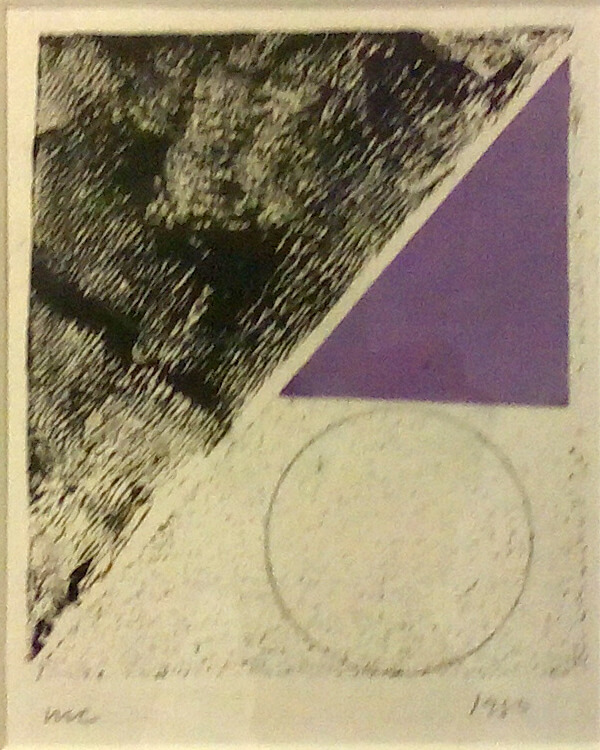 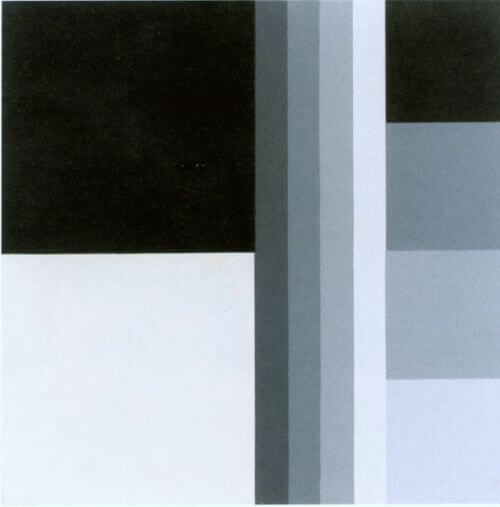 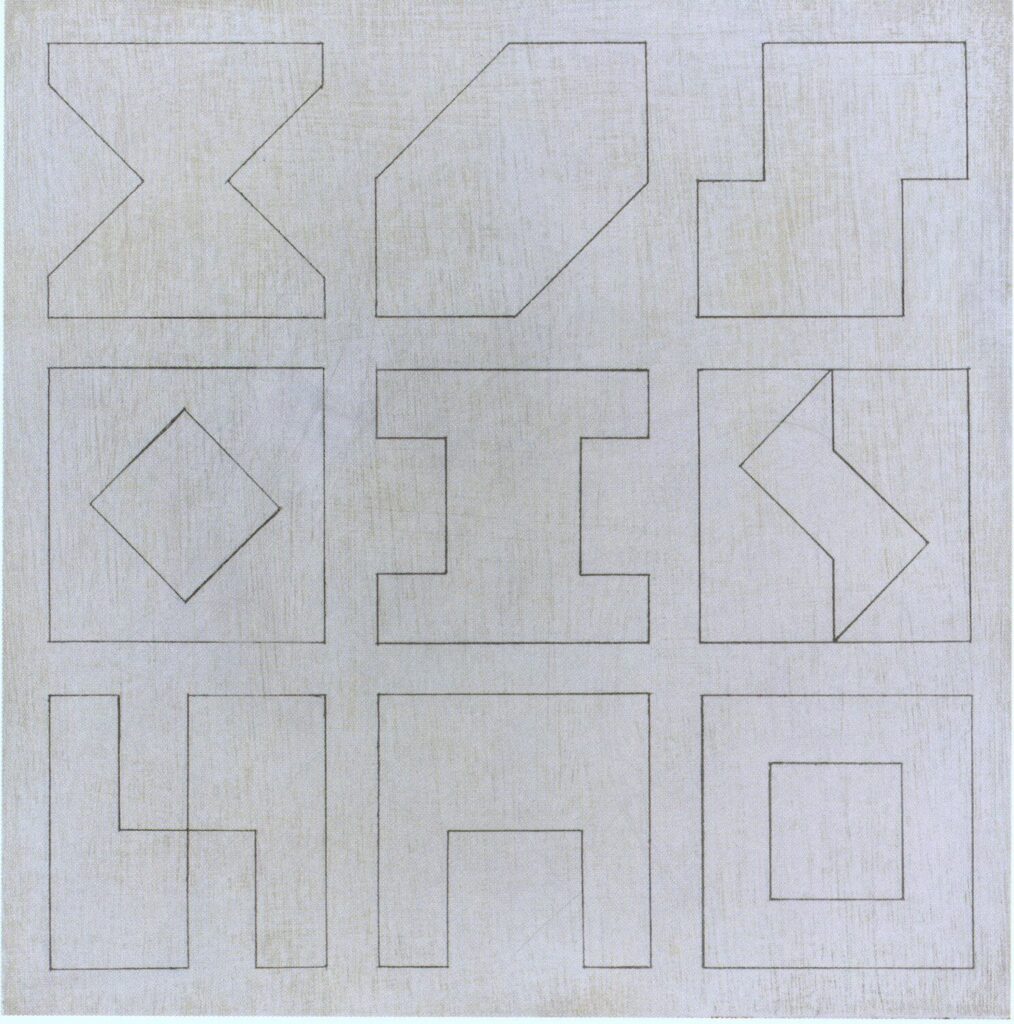 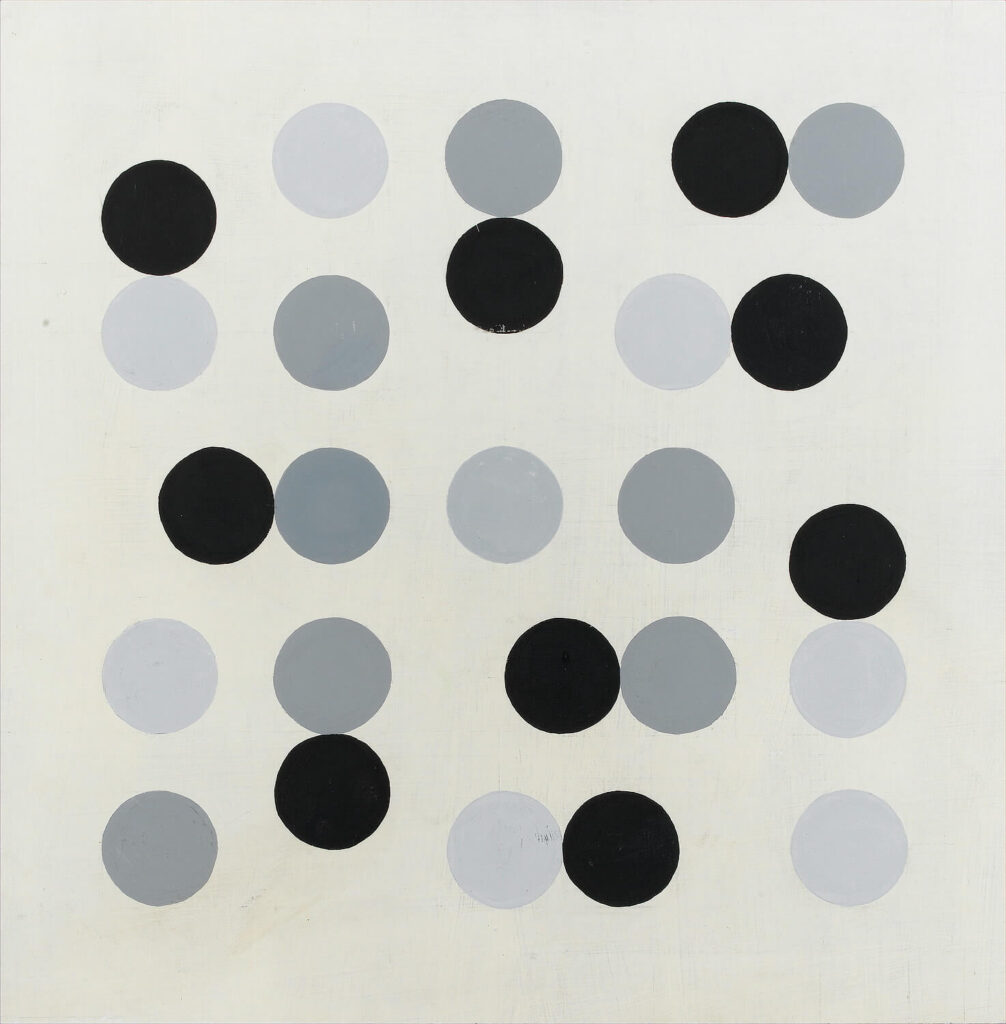 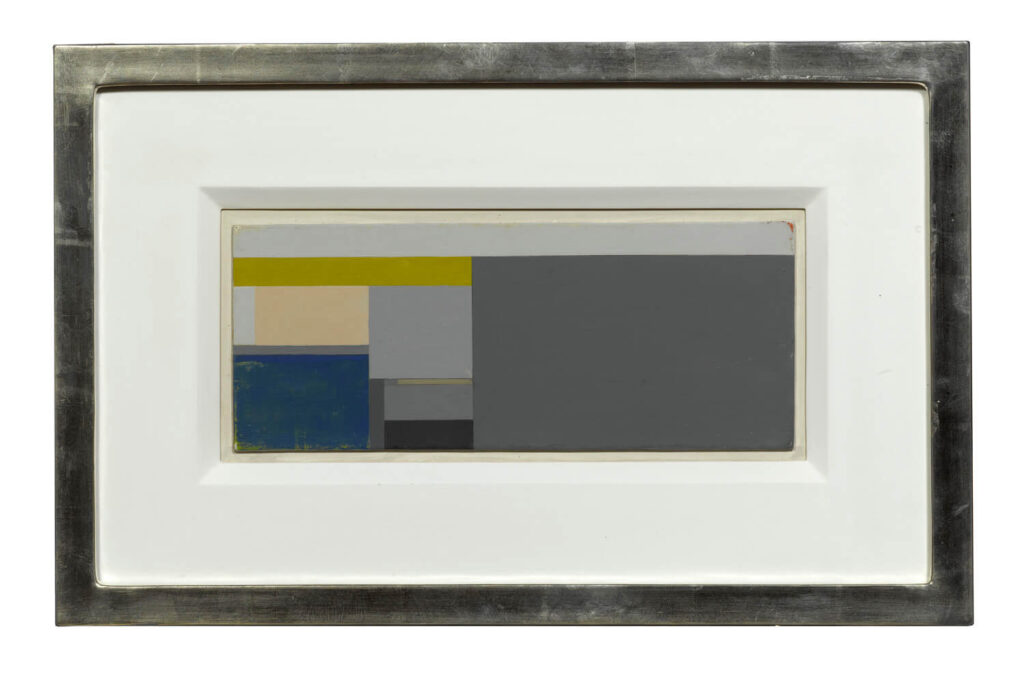 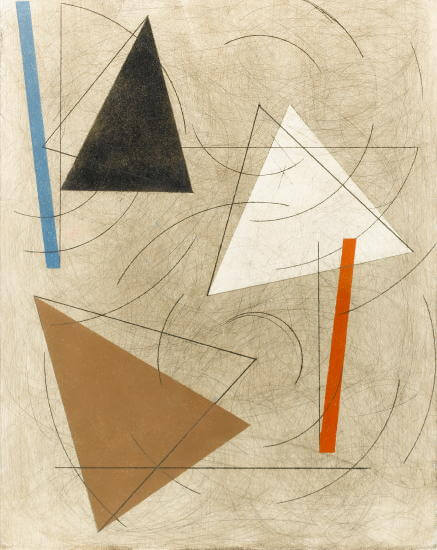