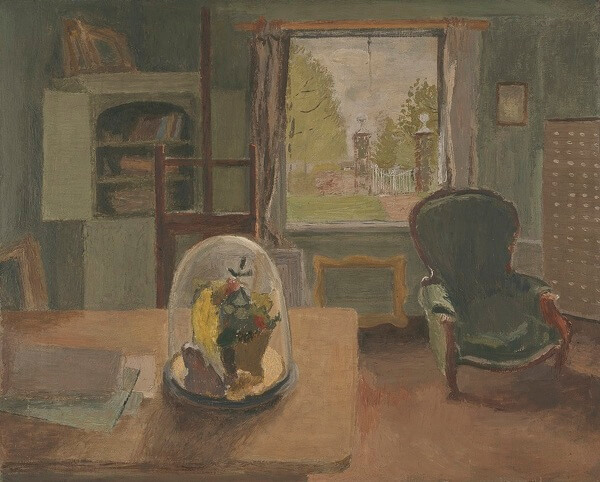 Country Studio is a wartime picture, produced while Mary Potter was

living temporarily at Berwick Hall, (a large house near Topplesfield in

Essex), with her two children and husband Stephen.

Something of this make-do situation can be felt in this picture. The

easel announces that the room is a studio, and there are also papers on

the table, empty frames and the back of a canvas in view. But the room is

to other use. It has a large, not quite square window which appears to

beyond. The whole scenario offers a very interesting exercise between

right up to the very forefront of the picture plan. Its horizontal line is

echoed in various other horizontals elsewhere and is challenged by the

verticals found in the easel, in cupboards and the sides of the window.

The room is dusky, its colours a combination of cool greens and warm

browns and pinks, all held together by the addition of white in order to

match and marry tonal values. Nevertheless, the dominant ingredient is

light, which touches the armchair and spreads across the floor and table,

highlighting the glass dome and the view outside. These two seem to

call to each other, setting up a tension that keeps us in the room while

view. At moments, the entire room seems to act as a frame for this view

through the window, but in fact it is this toing and froing that holds our

attention ‚Äì the conjoining of inner and outer.

biography and cultural history. She is former Editor of the Burlington Magazine. 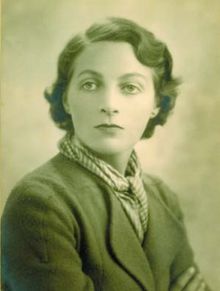 Mary Potter (n e Marian (Mary) Anderson Attenborough)
attended Beckenham School of Art (1916’18) and the Slade
School of Fine Art (1918’21), where she won first prize for
portrait painting. Briefly a member of the Seven and Five Society
she also exhibited with the NEAC and the LG.

In 1927, she married the writer and radio producer Stephen
Potter. They lived in Chiswick: many of her paintings from this
period evolve around views from her studio window. After moving
briefly to Manchester at the start of WWII, they rented Berwick
Hall, Essex, until peace returned.

In Essex and later in Aldeburgh, Suffolk, Potter focused more
on atmosphere and light, and her work became increasingly abstract.

She held numerous solo shows throughout her career,
including at the Bloomsbury Gallery (1932), the Redfern Gallery,
Arthur Tooth & Sons, Leicester Galleries, and ‘ following a major
retrospective at Whitechapel Art Gallery (1964) ‘ the New Art
Centre. Her final solo exhibition was at the Serpentine Gallery
(1981). 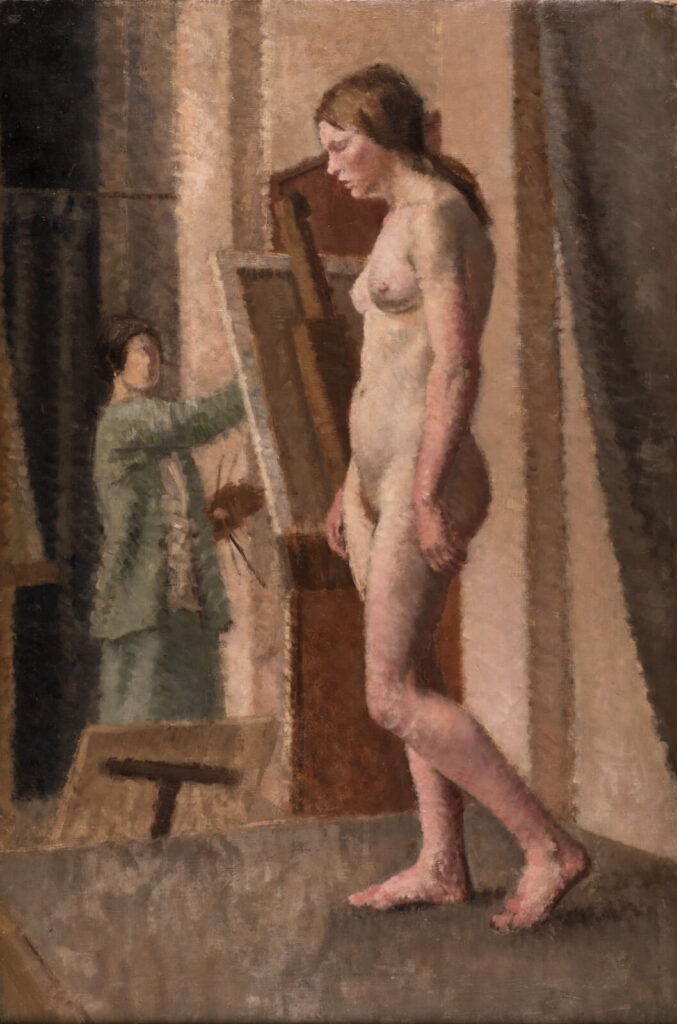