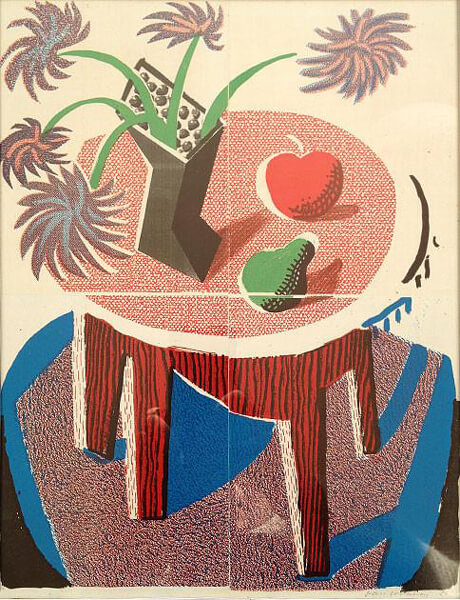 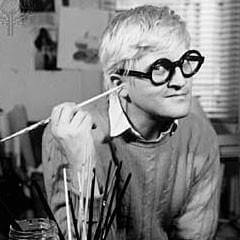 David Hockney (1937-) trained at Bradford College of Art, and then the Royal College, London, where his painting began to attract the attention of critics and collectors. He was associated with the Pop Art movement and in his experimentation with different styles, he showed great originality. His print-making career took off after he visited California when he worked at the studios of Gemini GEL in making remarkable etchings and lithographs, including a set of 39 prints inspired by the magical yet gruesome fairy tales from the Brothers Grimm.

Born and brought up in Bradford the fourth of five children, he now divides his time between London and California. He has however, never forgotten his ties with Yorkshire and has spent time living in Bridlington on the coast. The largest permanent Collection of David Hockney’s artworks are in Salts Mill, a renovated industrial mill in the village of Saltaire, a UNESCO World Heritage Site not far from Bradford.
Hockney’s first solo show was at the Whitechapel Gallery, London when Hockney was aged 26, he has since exhibited regularly and extensively all over the world including a massive recent retrospective at Tate Britain with a selection of his most famous works celebrating his skill in painting, drawing, printmaking, photography and video over the past six decades. In 2014, Richard Lloyd, International Head of Prints at Christie’s curated “Hockney Printmaker” at the Dulwich Picture Gallery before going on tour to the Bowes Museum. This exhibition highlighted Hockney’s prolific and technically expert career as a printmaker.
In 2006, Hockney’s painting, The Splash, sold for £2.6 million. In 2008, Beverly Hills Housewife (1966’67), a 12-foot-long acrylic that depicts the collector Betty Freeman standing by her pool in a long hot-pink dress, sold for $7.9 million at Christie’s in New York and in 2016 his Woldgate Woods landscape made £9.4 million at auction.
In 1990, Hockney was offered a Knighthood but he declined, he did however accept an Order of Merit in 2012 for his contribution to the arts
Go to artist page