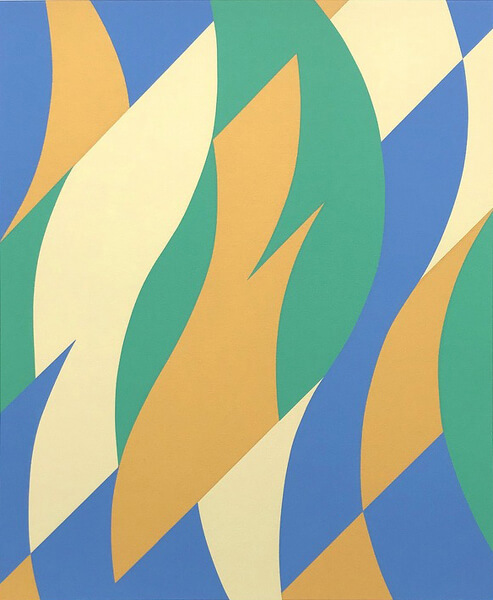 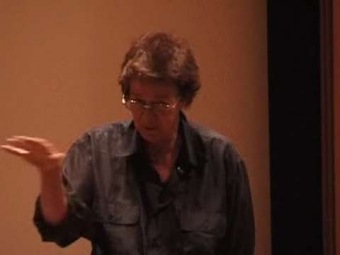 Painter born in Norwood, London. After her childhood in Cornwall and Lincolnshire and an education at Cheltenham Ladies’ College she attended Goldsmiths’ College, 1949-1952, and later at the Royal College of Art, 1952-55, where her peers included Peter Blake and Frank Auerbach. Her early work was figurative but about 1960 Riley began to develop her Op Art style comprising black and white geometric patterns that investigate the vitality of vision often culminating in a disorientating effect on the eye. Her first solo exhibition at Gallery One, London, was held in 1962, was followed by a second in 1963, for which Anton Ehrenzweig wrote the catalogue foreword. He also prepared a major critical essay on her art for Art International which helped secure her reputation. Riley worked entirely with black and white introducing colour only in 1966. Riley taught children for two years before joining the Loughborough School of Art, where she initiated a basic design course in 1959. She then taught at Hornsey School of Art and from 1962-64 at Croydon School of Art. She also worked for the J. Walter Thompson Group advertising agency from 1960, but gave up teaching and advertising agency work in 1964. In 1968 she won the International Prize for Painting, the first woman to do so, at the 34th Venice Biennale and in the same year, with Peter Sedgeley, helped set up SPACE, a scheme for organising artists’ studios which came into operation in 1969. Group exhibition venues for Riley include Arnolfini Gallery, Howard Roberts Gallery, Spacex Gallery, Exeter, Whitechapel Art Gallery, New Art Centre, Roche Court, MoMa, New York, Tate Gallery and the Hayward Gallery, London.

In an extensive world-wide career Riley has exhibited in the Museum of Modern Art in New York the show that originally drew international attention to her work. She has held several major retrospective exhibitions including two at the Hayward Gallery, one at the Serpentine Gallery and one at the Tate Gallery, London. In 2009 the Walker Art Gallery, Liverpool mounted a major retrospective of Bridget Riley’s drawings and painting entitled ‘Flashback’ covering every period of her career from 1960.

Represented by the London dealer Karsten Schubert, Riley has work in all major galleries in the UK and across five continents. These include the Bournemouth & Poole College Collection, Tate Gallery, GoMA, Leeds City Art Gallery, Rugby Museum and Art Gallery, Fitzwilliam Museum, Cambridge, the Ulster Museum, Leicestershire County Council, MoMa, New York, Cleveland Museum of Art, Ohio, Harvard University Art Museum, Museum of Contemporary Art, Leamington Spa Art Gallery, Los Angeles, MIMA, New Hall College, Cambridge, Queensland Art Gallery, Brisbane, Australia, University of Warwick Art Collection, V&A, London, Sheffield Art Gallery and the Whitworth Art Gallery, Manchester. One of her many other activities is as a committee member of the National Art-Collections Fund an organisation which has helped save nearly one million works of art for Great Britain. Riley has been made a Companion of Honour and awarded a CBE for her services to art.