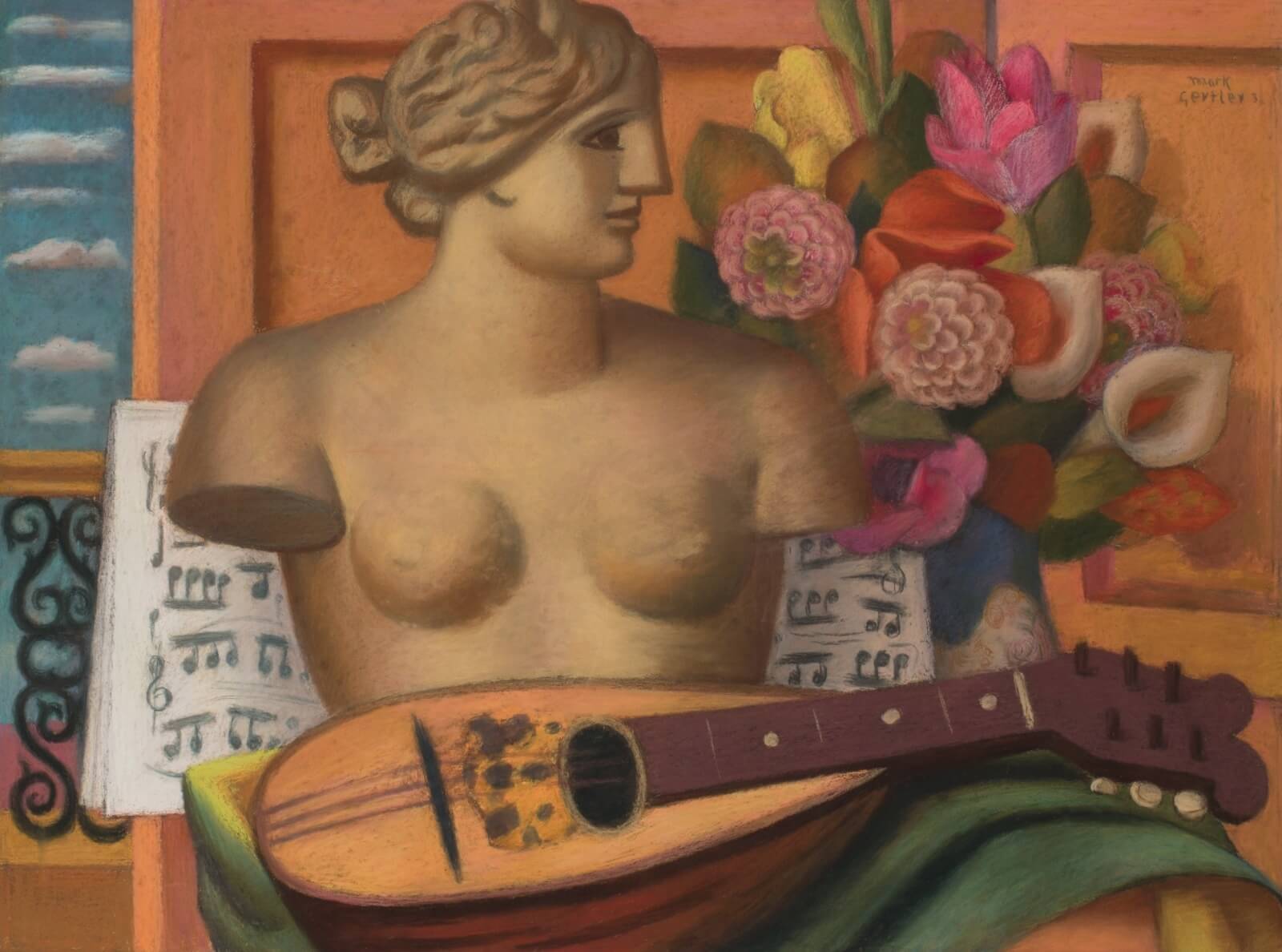 Literature: John Woodeson, ‘Mark Gertler, Sidgwick & Jackson, 1972, pp.296 & 348, Ill pl. 73
Sarah MacDougal, ‘Mark Gertler’, John Murray, 2002, p. 288
Extended Provenance: Dr Andrew Morland, Mr & Mrs Peyton Skipwith
Alan Fortunoff (1932-2000) was one of America’s great collectors of British realist painting of the first half of the twentieth century, with a particular passion for the work of Joseph Southall. Following his death his Southall collection was exhibited and dispersed through an exhibition at The Fine Art Society, but his widow retained until now the core of collection. Having recently moved to warmer climes and an apartment with large windows, amazing views and little wall space, Liss Fine Art have the unique privilege of offering these XX works, most of which have not been seen on the market since the 1980s.
Sarah McDougal records that ‘In mid-September 1934 Gertler and [Thomas] Balston travelled through Spain, visiting Madrid and Toledo, where they saw “numbers of beautiful things”, before returning to britain. In a copy of The Times he had bought in Barcelona, Gertler read with dismay of Roger Fry’s death. “What a loss!” he wrote to Mary Hutchinson, “I dare say you feel it very much.” He was saddened also by the thought that his forthcoming exhibition [at the Leicester Galleries] would be “the first show of mine not seen by Roger”. That autumn as a tribute to Fry’s influence he painted a still life entitled ‘Homage to Roger Fry.’

The iconography of this work and its connection to Roger Fry, apart from the classical bust, is unclear, but Woodeson records that gertler felt that there were often ‘parallels between his closely organised designs and music.’ 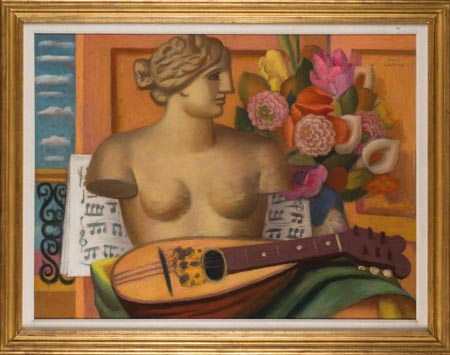 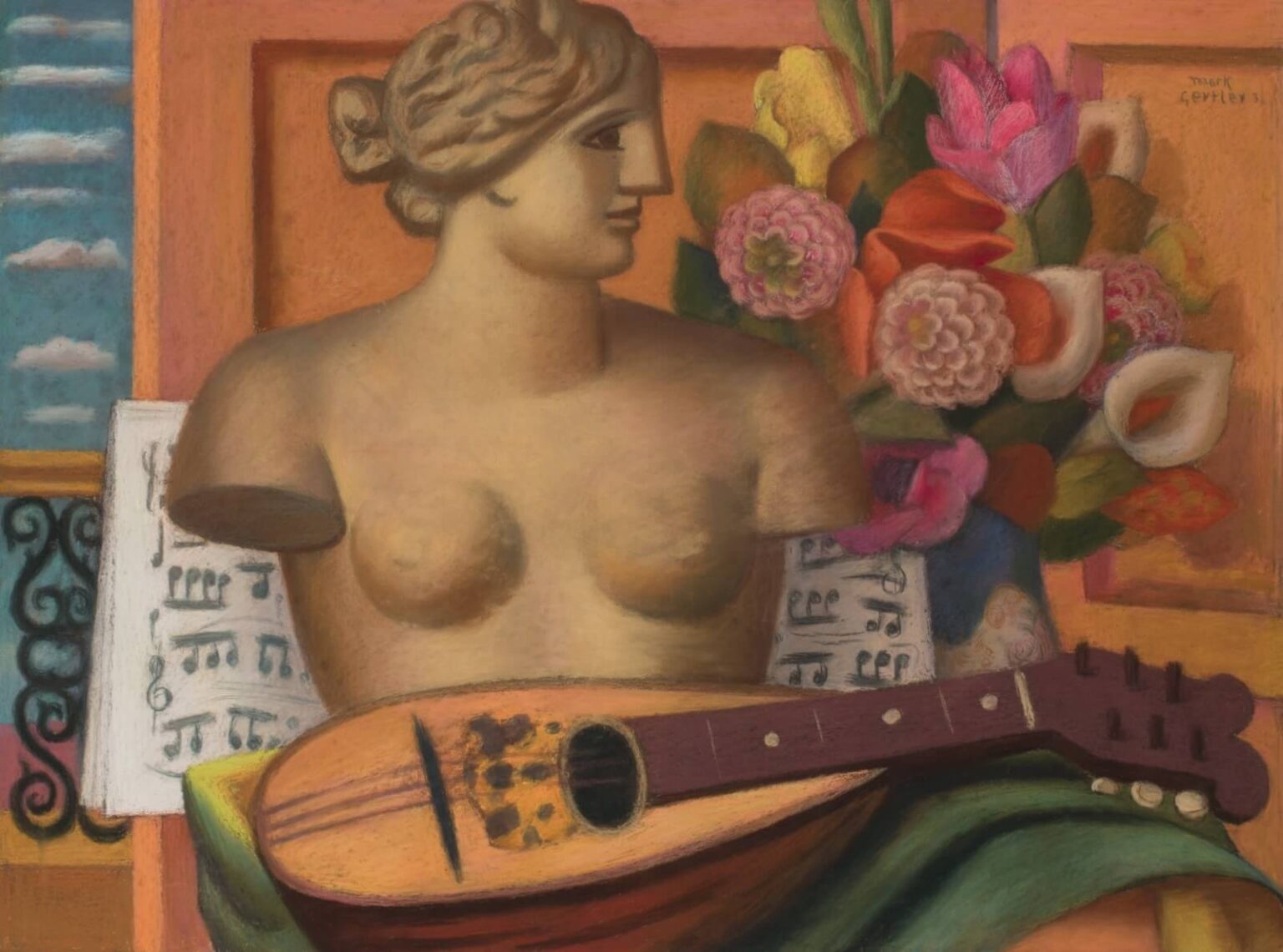 Painter, born in Spitalfields, London, the son of Polish refugees. In Gertler’s childhood, his family, in desperate poverty, moved to Austria, then America, before settling back in London in 1896. Gertler studied at Regent Street Polytechnic, 1906, but the following year, at his father’s insistence, was apprenticed in a stained-glass works. In 1908 he entered the Slade, with financial assistance from the Jewish Education Aid Society and in 1910 won the Slade prize for portrait painting. Here he was associated with the Whitechapel Boys but left the Slade in 1912, having already made friends with the patron Edward Marsh, and the artist, Dora Carrington, who brought him into the Bloomsbury set and with Lady Ottoline Morrell. Through them, he exhibited with the Friday Club and went on to paint his most famous picture, Merry-Go-Round, (now in the Tate Gallery) in 1916. As a conscientious objector, this was a clear statement of Gertler’s abhorrence of war. In 1918, Gertler briefly showed with the with Roger Fry’s Omega Workshops. In 1992 an important exhibition of his paintings and drawings took place at the Camden Arts Centre.

He held his first solo exhibition in 1921 at Goupil Gallery and also showed at the NS in its early years and with the Pastel Society. Periods were spent in sanatoriums in the early 1920-s owing to his tuberculosis, but he continued to paint and exhibit despite ill-health. Unhappiness, hardship and severe depression contributed to his suicide. During the 1930’s he became a part-time teacher at the Westminster School of Art to supplement his spasmodic income from painting. The Ben Uri, Brighton and Hove Museums and Art Galleries, Fitzwilliam Museum, Gracefield Arts Centre, Glynn Vivian Art Gallery, Hull University, Jerwood Gallery, Northampton Museum and Art Gallery, Stoke-on-Trent Art Gallery and the Tate Gallery are among major museums in the UK that hold examples of his work. 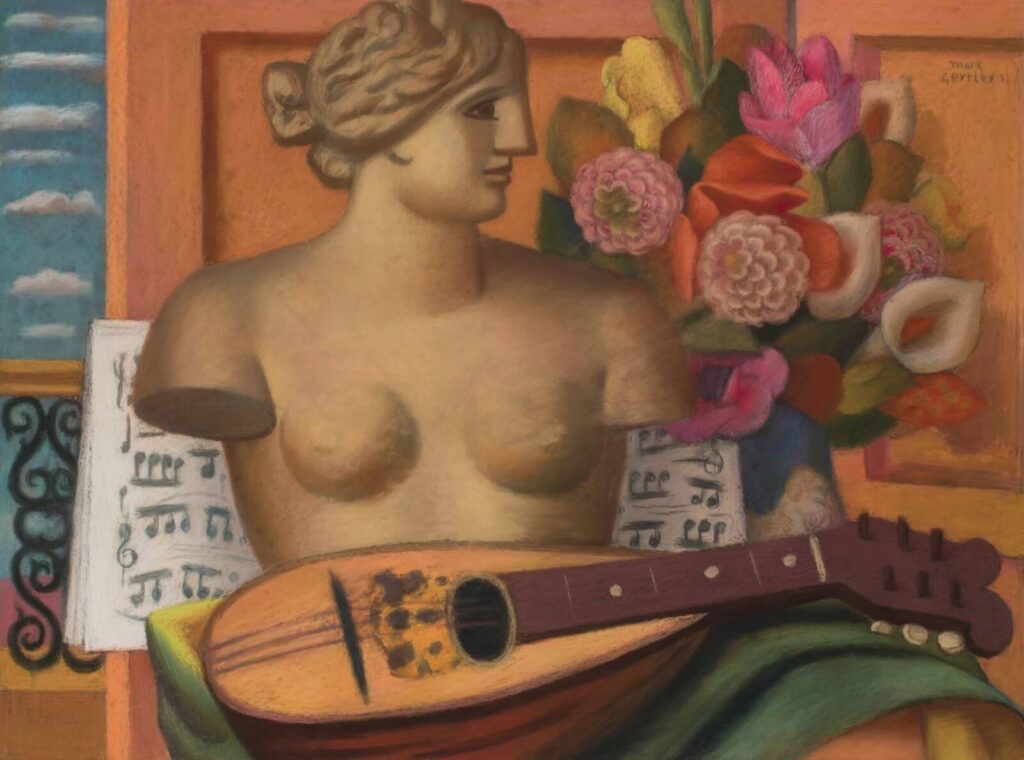