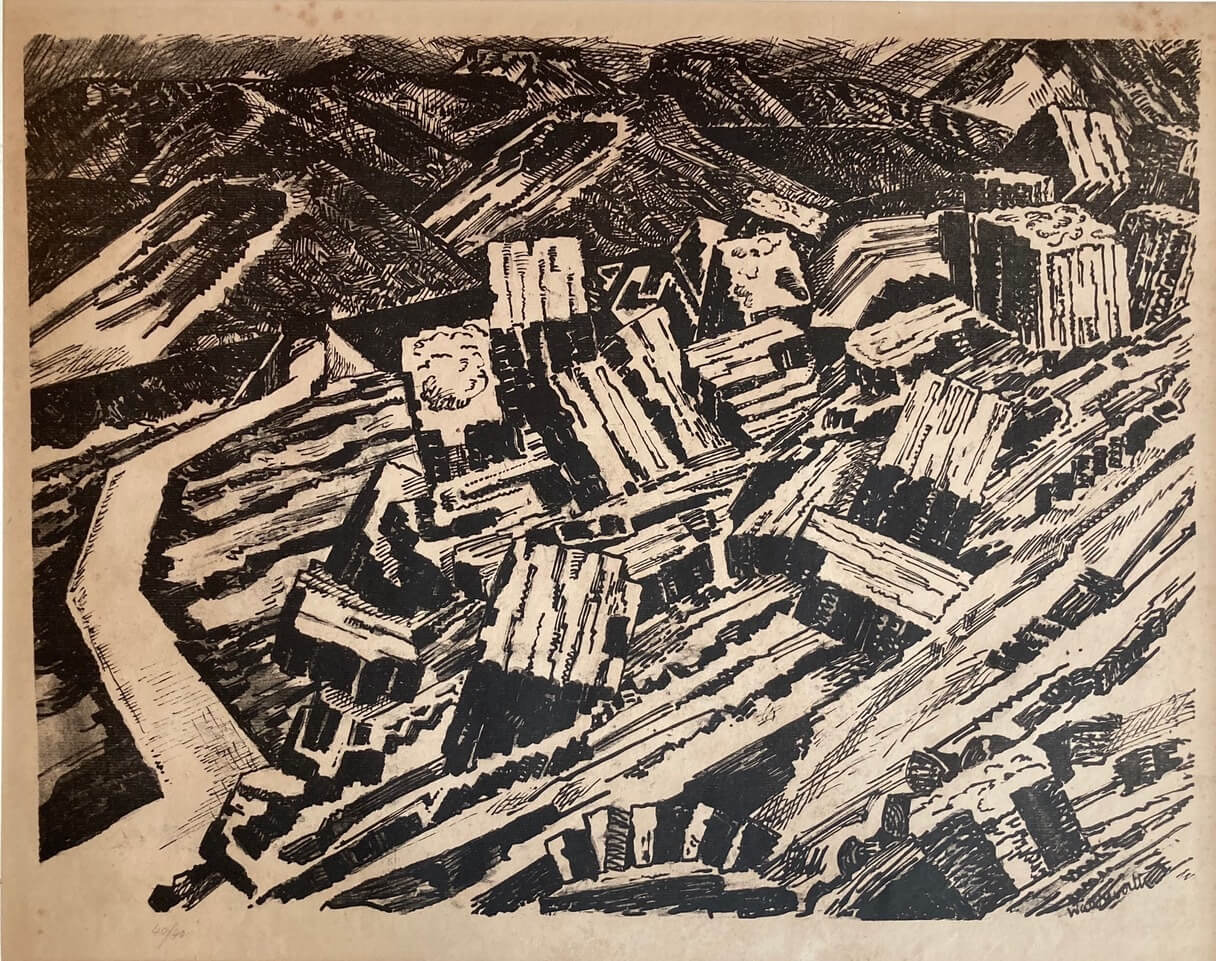 SKU: 11211
Signed in the block and numbered in pencil 40/40, Lithograph some foxing around the edges

‘The Black Country subjects interpreted through drawings, watercolours, woodcuts and lithographs form the largest distinct group within Wadsworth’s work as a whole. While travelling between Liverpool and London in 1918, he was sufficiently arrested by the scenery around Birmingham, Wolverhampton, Dudley and Leeds to return on foot in the first half of 1919 in order to sketch his impressions; these were then developed into the highly finished compositions shown at the Leicester Galleries in 1920. The exhibition met with enormous acclaim, one critic describing the studies of Ladle Slag as attaining the level of sublimity to be found in “the ruins of Karnac at night, the Mountains of the Moon …” (B. Wadsworth, p.91), while the ‘Observer’s’ critic P. G. Konody wrote rather more penetratingly about how Wadsworth brought from Vorticism into representational art “a severe sense of form and rhythm, a logic of organisation, that are not found in the work of artists depending entirely on visual impression. These qualities enable him to distil art of the highest order out of material that to the ordinary painter would be not only unpromising but positively forbidding” (‘Edward Wadsworth, The Black Country’, Ovid Press, London 1920, and B. Wadsworth, p.91).Wadsworth executed two lithographs, ‘Ladle Slag, Old Hill 1’ and ‘2’, both purporting to exist in editions of 40, which are closely related to the drawings exhibited in 1920, together with a third subject, ‘Industrial Landscape’ (Sycamore Collection catalogue, Bolton Museum and Art Gallery, 1988, no. 213). The British Museum’s print is connected with the watercolour illustrated as plate IX in the selection printed by the Ovid Press in 1920, following the success of the exhibition. The drawing was purchased at the exhibition by Sir Michael Sadler, Vice-Chancellor of Leeds University, and is now in the university’s collection. The Victoria and Albert Museum owns two impressions of this image, one printed on cream paper, the other on Japan and dated 1920 and numbered “14/40”. One further lithograph belongs with this group, although it is not of a Black Country subject: ‘Quarry: Cornwall’ emerged from a summer holiday Wadsworth took in Newlyn in 1920, returning to London on foot. The Victoria and Albert Museum owns an impression presented by the artist.’ 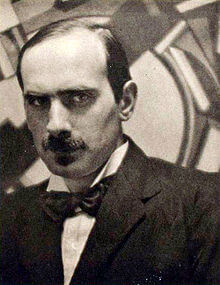 Painter and wood engraver, born in Cleckheaton, Yorkshire. On leaving school, he studied engraving for one year in Munich, spending his spare time at the Knirr Art School also in Munich. He studied art formerly at Bradford School of Art and the Slade. Wadsworth participated briefly in the Omega Workshops, showed with the Friday Club, the Arts League of Service and about this time exhibited with the short-lived Grafton Group alongside Etchells, and sculptor Gaudier-Brzeska. He then broke away with Wyndham Lewis from establishment art and took part in the Rebel Art Centre. His knowledge of German enabled him to contribute a translation of Kandinsky’s ‘Uber das Geistige in der Kunst’ (Concerning the Spiritual in the Art) for Blast issue No 1 in 1914. Wadsworth whose work was reproduced in Coterie and Art & Letters also signed the Vorticist Manifesto and helped to forge new ground with a non-figurative style.

During World War I he served as an intelligence officer in the Navy and was invalided out in 1917 when he spent a year working on dazzle camouflage for ships in Liverpool and Bristol. During the 1920’s he showed with the short-lived Group X but after he returned to a more straightforward representational style and travelled much abroad. A founder member of Unit One in 1934, he was also impressed at the time with the Abstraction-Cr ation movement in France. In 1943, he was elected an Associate of the RA and in 1952 his work was represented in the British pavilion at the Venice Biennale. A posthumous retrospective exhibition of his work was held in 1951 at the Tate Gallery and a later retrospective was held at the Camden Arts Centre, London in 1990. His work is held in art galleries around the world including ACGB, Brighton Museum & Art Gallery, BM, CAS, Cooper Gallery, Barnsley, IWM, Newport Art Gallery, Swindon Art Gallery, Tate, Towner Art Gallery, V&A and the Whitworth Art Gallery.
With thanks to artbiogs.co.uk
Go to artist page