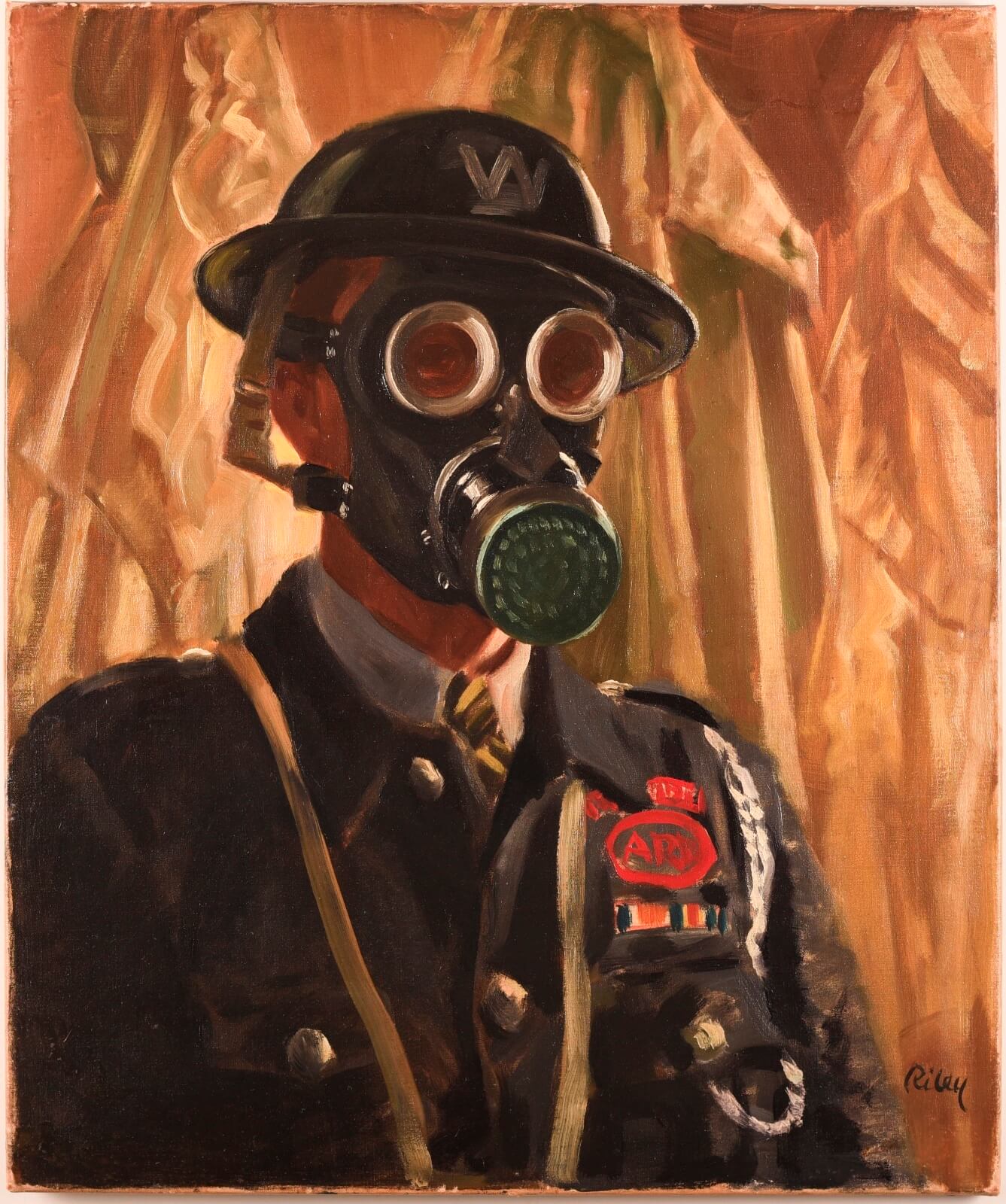 SKU: 7427
Signed,
Inscribed with title and date on the stretcher
Oil on canvas

Provenance:
With the artist until 1966; thence by descent
Presentation:
framed

Although Riley saw active service during WW1 when WW2 broke out he was in his mid 40’s and therefore not called up (the National Service -Armed Forces- Act imposed conscription on all men aged 18 to 41). Men and women of all ages, however, could serve in the ARP a voluntary force dedicated to the protection of civilians from the danger of air raids.

During the War, the ARP was responsible for the issuing of gas masks, pre-fabricated air raid-shelters, the upkeep of local public shelters, and the maintenance of the blackout, (patrolling the streets to ensure that no light was visible). During and after air raids they doused incendiary bombs with sandbags and helped rescue people, administer emergency first aid, search for survivors, and help recover bodies.

There were around 1.4 million ARP wardens in Britain during the war, almost all unpaid part-time volunteers, who also held day-time jobs. They had a basic uniform consisting of a set of overalls, wellington boots, an armlet, and a black steel helmet and a small silver badge. The steel helmet had W for Warden in bold white writing across it, except for Chief Wardens who wore white helmets with black lettering. 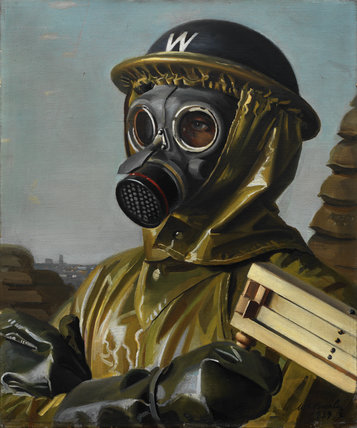 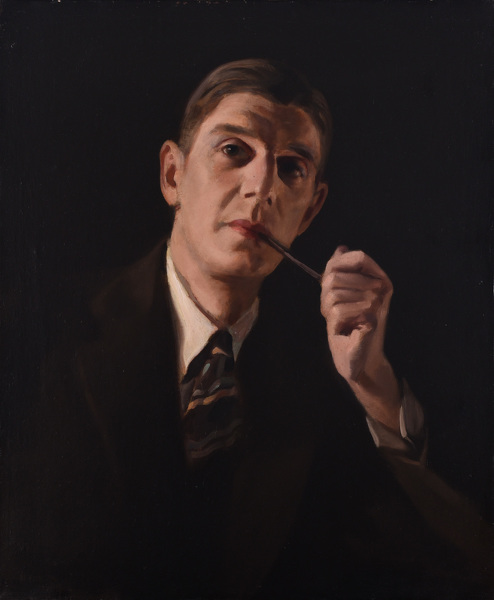 Portrait of Harry Riley, smoking a pipe by Harry Dixon 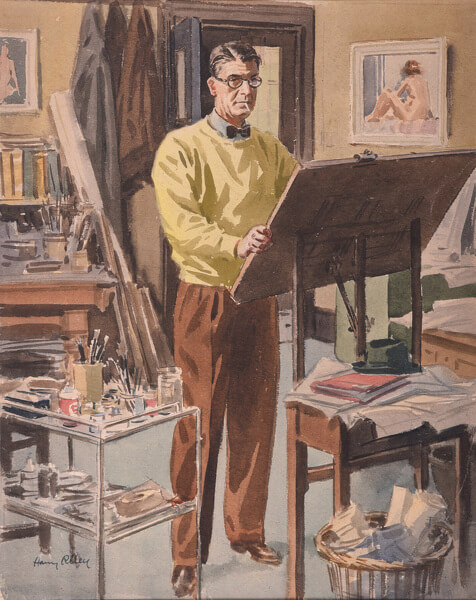 Henry Arthur Riley was a painter, born in Chelsea, London, Harry Riley as he was commonly known, first studied art at the Hammersmith School of Art and was employed in Fleet Street as a junior artist while continuing to attend evening classes at nearby Bolt Court, 1910-15 studying under Walter Bayes.
Following active service in World War I Riley continued his studies at St. Martin’s School of Art. He exhibited regularly at the Royal Academy, Royal Society of British Artists and the Royal Institute of Oil Painters.

Henry Arthur Riley was a great cartoon illustrator and his work was reproduced on numerous occasions in the Reynolds News, London Opinion, Blighty, Humorist and the Sunday Chronicle, as well as Punch and other influential newspapers and magazines of the 1930’s. He also was commissioned by British Rail for supplying travel posters. Elected RI in 1940 Riley was also a member of the Savage Club and the London Sketch Club. 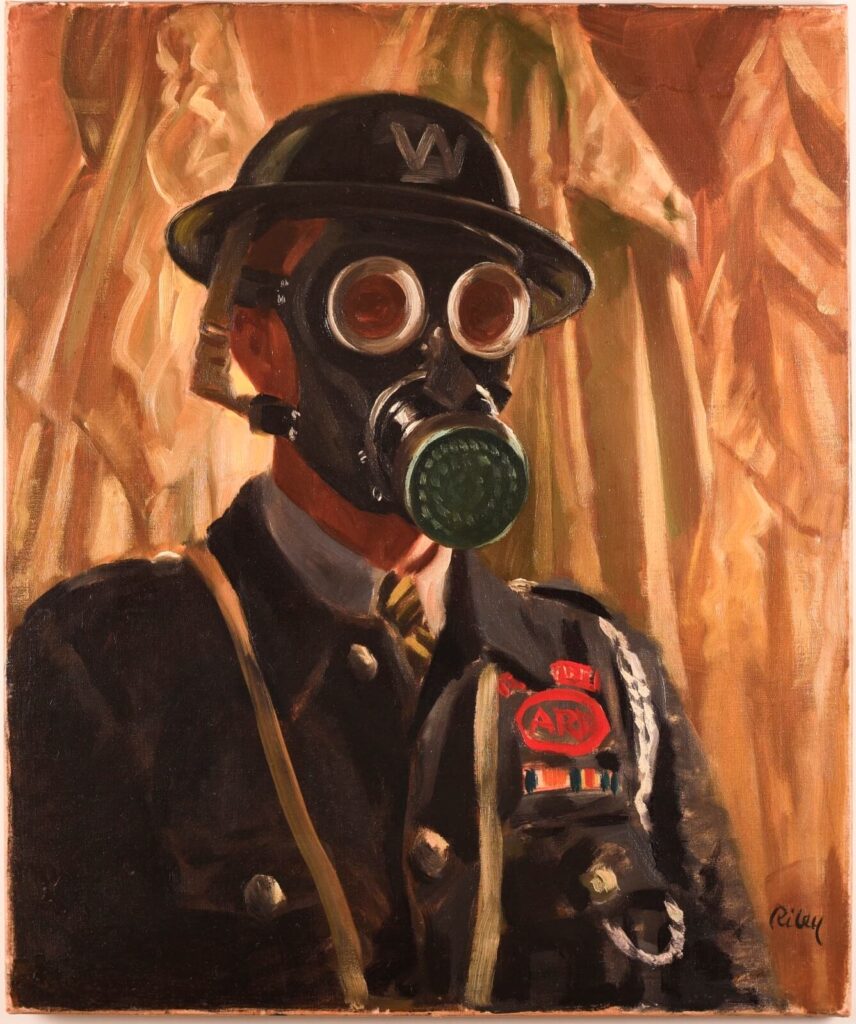