Provenance:
The Artist’s Studio
Presentation:
folio
Disclaimer:
Liss Llewellyn are continually seeking to improve the quality of the information on their website. We actively undertake to post new and more accurate information on our stable of artists. We openly acknowledge the use of information from other sites including Wikipedia, artbiogs.co.uk and Tate.org and other public domains. We are grateful for the use of this information and we openly invite any comments on how to improve the accuracy of what we have posted. 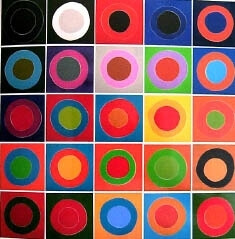 Abstract painter and printmaker born Terence Ernest Manitou Frost in Leamington Spa, Warwickshire. He enlisted in the army in World War II in 1939 and after serving in Sudan, Abyssinia, Egypt and Crete he was taken prisoner-of-war in June 1941. In the POW camp at Hohenfais, Bavaria, he met Adrian Heath who encouraged him to paint. After the cessation of hostilities in 1945 he began attending evening classes at Birmingham School of Art and the following year he relocated to Cornwall where he attended St. Ives School of Painting. In 1947 Frost held his first solo exhibition at G.R. Downing’s bookshop in St. Ives, and that autumn began studying at Camberwell School of Arts & Crafts. He did not paint his first abstract picture until 1949 and from then on his work became totally abstract and during the next decade was associated with the short-lived Constructionism movement.

He settled permanently in St. Ives in 1951 and for a time was a studio assistant to sculptor Barbara Hepworth. He was appointed Gregory Fellow at Leeds University, 1954-56. Frost taught variously at Leeds School of Art, Bath Academy, Corsham, Coventry Art College and Reading University and received a Knighthood in 1998. In a long and extensively fruitful career he showed at every major art societies in his adopted Cornwall including the STISA and the NSA. He also exhibited across the UK and indeed on a world-wide basis. Latterly many of his works were reproduced as limited edition prints and sold through outlets like CCA Galleries and the Curwen Gallery. Frost’s estate is handled by and exhibited at Beaux Arts Bath and Beaux Arts London and has also been exhibited at Belgrave Gallery, Austin Desmond Fine Art and at KHG.
Frost’s work is in major public collections and galleries across the world including in the UK. They can be seen in the ACGB, Bolton Art Gallery, Bournemouth & Poole College Collection, Cheltenham Art Gallery, Cornwall County Council, GAC, Fitzwilliam Museum, Gulbenkian Foundation, Hepworth Wakefield, Huddersfield Art Gallery, Jerwood Foundation, Leamington Spa Art Gallery, National Museum of Wales, Oldham Art Gallery, Peter Scott Gallery, Pier Arts Centre, Portsmouth Art Gallery, Scottish National Gallery of Modern Art, Stirling University Art Collection, Swindon Art Gallery, Tate Gallery, University of Warwick Art Collection, Ulster Museum and the Victoria & Albert Museum in London. Abroad his work is in the collections of art galleries and museums in Australia, New Zealand, Israel, USA and Canada.
Bibliography:
Terry Frost, Warm Frost: Featuring the work of Sir Terry Frost, RA by Alison Hodge. Published in Penzance, Cornwall, 2003. ISBN 0906720621.
Terry Frost : A personal narrative by David Lewis. Published by Scolar Press, Aldershot, 1994. ISBN 1859280412.
Terry Frost prints : A catalogue raisonn by Dominic Kemp. Published by Lund Humphries, Farnham, UK, 2010. ISBN 9781848220355.
Terry Frost: The Biography by Roger Bristow. Published by Sanson & Co, Bristol, 2013. ISBN 9781906593780.
With thanks to artbiogs.co.uk
Go to artist page