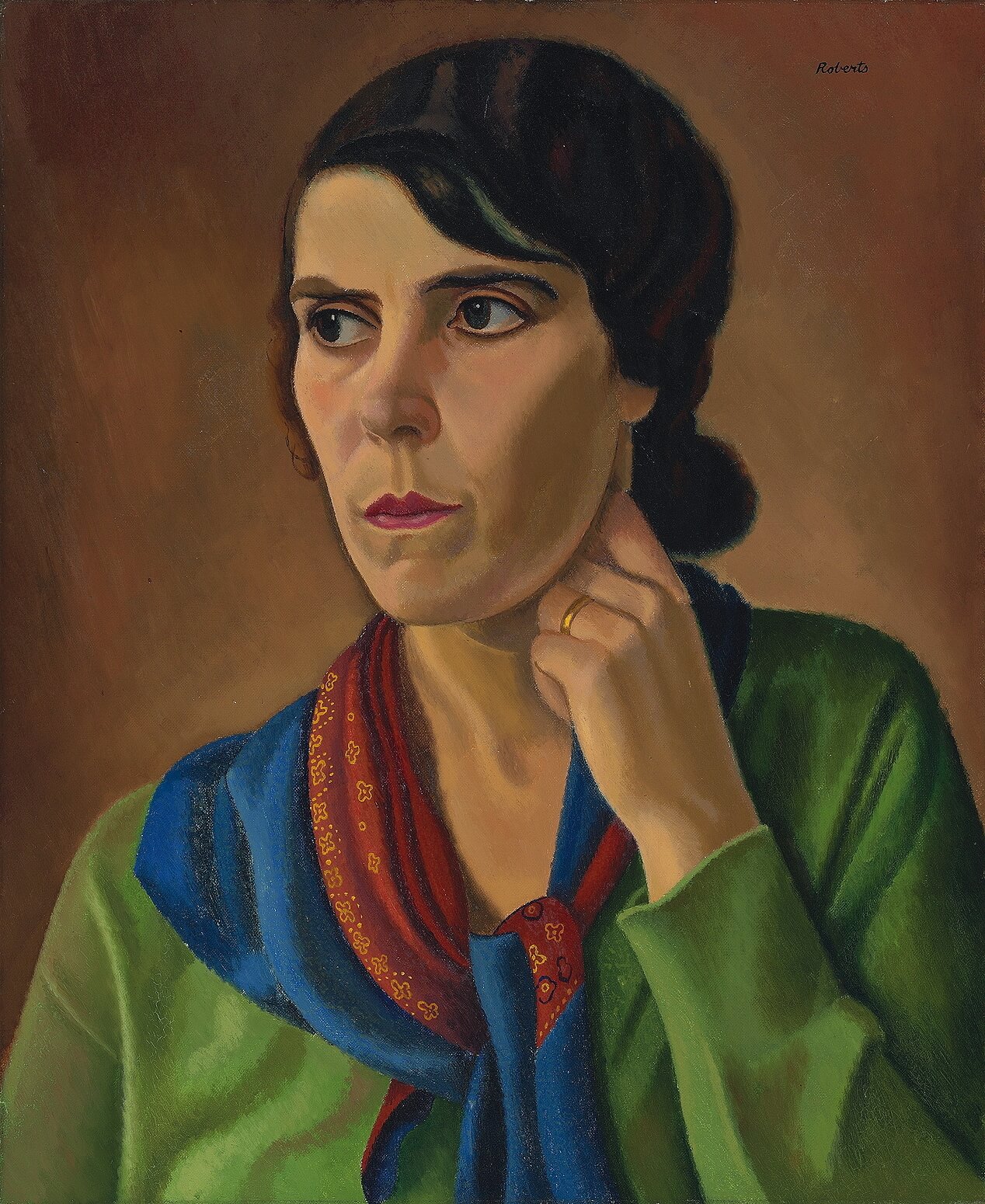 May Berry was probably the Mrs Berry who sold Roberts’s oil The Park Bench through Sotheby’s on 6 April 1960 and the wife of the Joe Berry’ mentioned in a notebook of Roberts’s son’s as A civil servant, no children, which enabled him to collect modern firsts, signed and limited ‚Ä¶ His books lined a wall and more of his flat overlooking the Thames.  We went over to see the Boat Race from his windows ‚Ä¶ The Berrys visited Haverstock Hill [where the Robertses lived in 1929‚Äì35]. After tea in the garden, S[arah Roberts] and Mrs B went up to prepare supper, Berry and WR were discussing politics.’ Joe Berry’ would appear to have been the nickname of Arthur Edwin Berry, who in 1922 passed the Civil Service Clerical Class (Men)’ examination and was employed at the Inland Revenue and, according to electoral registers, in the early 1930s was living at 58 Upper Mall ‚Äì overlooking the Thames at Hammersmith ‚Äì with May Berry.

The Berrys were evidently living at 58 Upper Mall at the time when Eric Ravilious and Tirzah Garwood were living at no. 48,

Illustration ¬© The Estate of John David Roberts. Reproduced with the permission of the William Roberts Society. Catalogue information based on the catalogue raisonné by David Cleall. For this and full details of the exhibitions cited, see the links below. 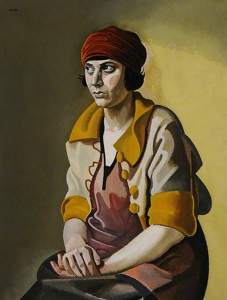 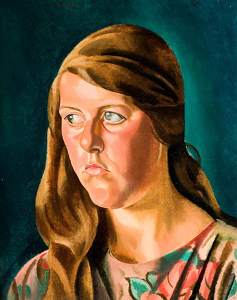 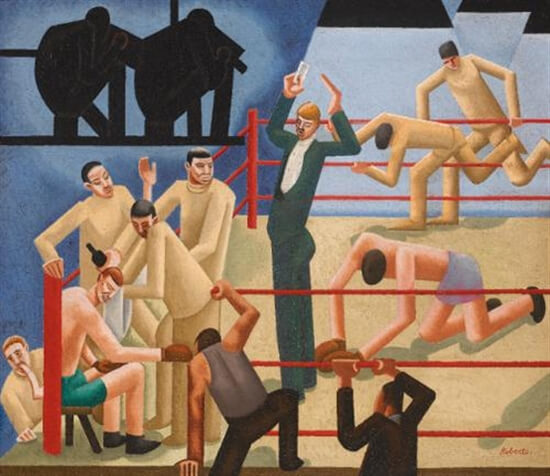 Son of an Irish carpenter and his wife, Roberts was born in Hackney, London. In 1909 he took up an apprenticeship with the advertising firm of Sir Joseph Causton Ltd, intending to become a poster designer, and he attended evening classes at St Martin’s School of Art in London. He won a London County Council scholarship to the Slade School of Art in 1910. His contemporaries included a number of brilliant young students, among them Dora Carrington, Mark Gertler, Paul Nash, Christopher Nevinson, Stanley Spencer and David Bomberg.

Roberts was intrigued by Post-impressionism and Cubism, an interest fueled by his friendships at the Slade (in particular with Bomberg) as well as by his travels in France and Italy after leaving the Slade in 1913.
Later in 1913 he joined Roger Fry’s Omega Workshops for three mornings a week, and the ten shillings a time that Omega paid enabled him to create challenging Cubist-style paintings such as The Return of Ulysses (now owned by Castle Museum and Art Gallery, Nottingham).

After leaving Omega he was taken up by Wyndham Lewis, who was forming a British alternative to Futurism. Ezra Pound had suggested the name Vorticism, and Roberts’s work was featured in both editions of the Vorticist literary magazine BLAST. Roberts himself, however, later preferred the description ‘Cubist’ for his work of this period.

In 1916 Roberts enlisted in the Royal Artillery as a gunner, serving on the Western Front. Having been told that artists were being chosen to do war paintings for the Canadian War Records Office, he applied, and in 1918 was ‘loaned’ to the Canadians for six months as an official war artist. He was subsequently also commissioned by the British Ministry of Information, for whom he painted A Shell Dump, France (1918’19; Imperial War Museum, London). His experiences at the front ‘ touched upon in his memoir ‘4.5 Howitzer Gunner’ ‘ shifted the direction of his work, and significant pieces from his wartime output, such as the powerful Canadian commission The First German Gas Attack at Ypres (1918), dramatically depict the horror of war and are possibly the most acerbic produced by any of the British artists employed under the government’s schemes. Indeed they are bitter enough to rival the social realism of the German artists Otto Dix and George Grosz, and are possibly in a class of their own for their portrayal of the arduous ‘ and occasionally deadly ‘ life in the firing lines.

In 1915 he had met Sarah Kramer (1900’92), sister of fellow Slade student Jacob Kramer. Sarah appeared constantly in his work thereafter. They married in 1922, and had one son, John David Roberts (1919’95), who, after studying physics at University College London, became a poet and guitar scholar.

After the war, Roberts’s subject matter turned to the documentation of urban life and portraiture ‘ portrait subjects included T. E. Lawrence (1922; Ashmolean Museum, Oxford) and John Maynard Keynes and his wife, Lydia Lopokova (1932; National Portrait Gallery, London) ‘ as well as some scenes from ‘Greek Mythology and Christian Mythology’, as he put it.
In 1922’6 he was commissioned to produce illustrations and decorations for Lawrence’s Seven Pillars of Wisdom. In 1923 he held his first one-man exhibition, at the Chenil Gallery in Chelsea, London, and two years later he was appointed visiting lecturer at the Central School of Art, a post he held until 1960.

When the Second World War broke out, in September 1939, Roberts was too old for combat service. He applied for work as a war artist, but fell out with the War Artists’ Advisory Committee over transport arrangements, and completed only a few portrait drawings of people involved with the war effort and some studies of life on the home front, including Munitions Factory (1940) and The Control Room, Civil Defence Headquarters (1942) ‘ both now in Salford Art Gallery. He spent the war years in Oxford, where he painted some rural scenes, traveling to London for his teaching work.

In 1946 he and Sarah returned to London and took a room at 14 St Mark’s Crescent, a house in multiple occupancy backing on to the Regent’s Canal, near Primrose Hill. When other tenants moved out they took over additional rooms, and eventually with financial help from a friend they were able to buy the whole house, which would remain their home for the rest of their lives and whose neighbourhood would provide Roberts with subject matter.

In 1948 he showed work at the Royal Academy summer exhibition for the first time ‘ a self-portrait and a portrait of Sarah in a headscarf as The Gypsy (he had made a number of pictures of gypsies during his Oxford years) ‘ and he would show work there in every subsequent year until his death.

In 1956 the Tate Gallery held an exhibition entitled Wyndham Lewis and Vorticism, with 150 works by Lewis and a small selection by other artists to give ‘an indication of the effect of his immediate impact upon his contemporaries’. Roberts was offended that the catalogue ‘would lead the uninitiated to suppose that the artists designated as “Other Vorticists” are in some way subservient to Lewis’, and published a series of ‘Vortex Pamphlets’ in which he railed against the exhibition, the catalogue, the press coverage and the account of his own career contained in Modern English Painters by the Tate’s director, Sir John Rothenstein, which appeared at about the same time. Targets of earlier visual satires had included Walter Sickert and Roger Fry. To publicise his own work he also published Some Early Abstract and Cubist Work 1913’1920 (London, 1957), the first of a series of collections of reproductions of his paintings, with somewhat polemical prefaces.

Roberts was often described as reclusive, and he was very wary about interviewers ‘ especially after an Observer journalist who visited him produced an article that Roberts felt was concerned more with his rather spartan lifestyle than with his work. ‘What kind of art critic is this, who sets out to criticise my pictures, but criticizes my gas stove and kitchen table instead?’ he asked. One admirer of his work has told how she saw him getting on to a number 74 bus and ‘Fascinated to gain a sighting of the octogenarian recluse, she followed him to the top deck. Aided by “the chutzpah of youthful inexperience”, she respectfully asked him if she were addressing Mr William Roberts. After what felt like an interminable pause, and with his gaze defiantly averted, he replied: “I really do not know.”

In 1961 Roberts received an award from the Calouste Gulbenkian Foundation ‘in recognition of his artistic achievement and his outstanding service to British painting’. In that same year he began painting The Vorticists at the Restaurant de la Tour Eiffel, Spring 1915 (completed 1962; now in the Tate Gallery), a nostalgic recollection of a boisterous Vorticist gathering in 1915. A major retrospective of his work, organised by the Arts Council of Great Britain, opened at the Tate Gallery in 1965, and a smaller version was also shown in Newcastle and Manchester. Roberts was elected a full member of the Royal Academy in 1966 (he had been an associate member since 1958), and he continued to depict large-scale urban scenes in his paintings until his death in 1980.

After his son had died intestate, The Guardian revealed that the Treasury Solicitor had control of a large number of works by Roberts, which it refused to lend to an exhibition at the Hatton Gallery in Newcastle upon Tyne. Since then it has been announced that 117 of these works have been allocated to the Tate Gallery in lieu of inheritance tax, and the Tate will also house the remainder.

Roberts’s account of his early years (written in 1977) appeared posthumously, in 1982, and in 2004 William Roberts: An English Cubist by Andrew Gibbon Williams (Lund Humphries), the standard monograph on this painter, was published. 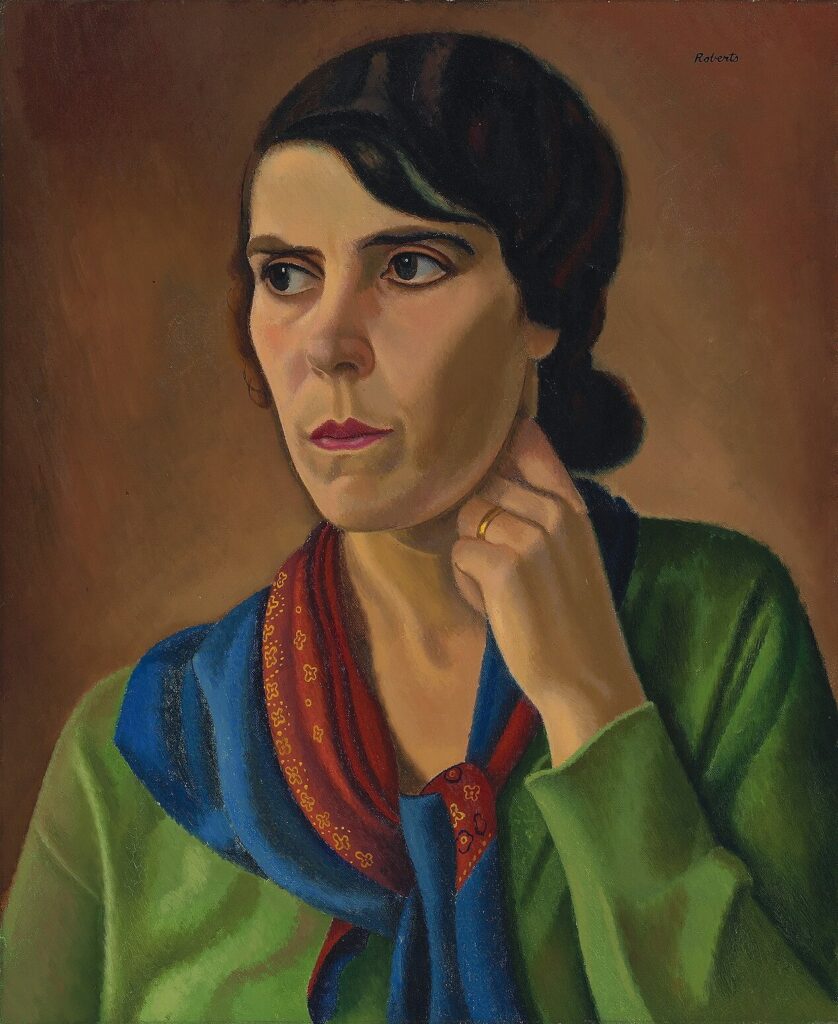