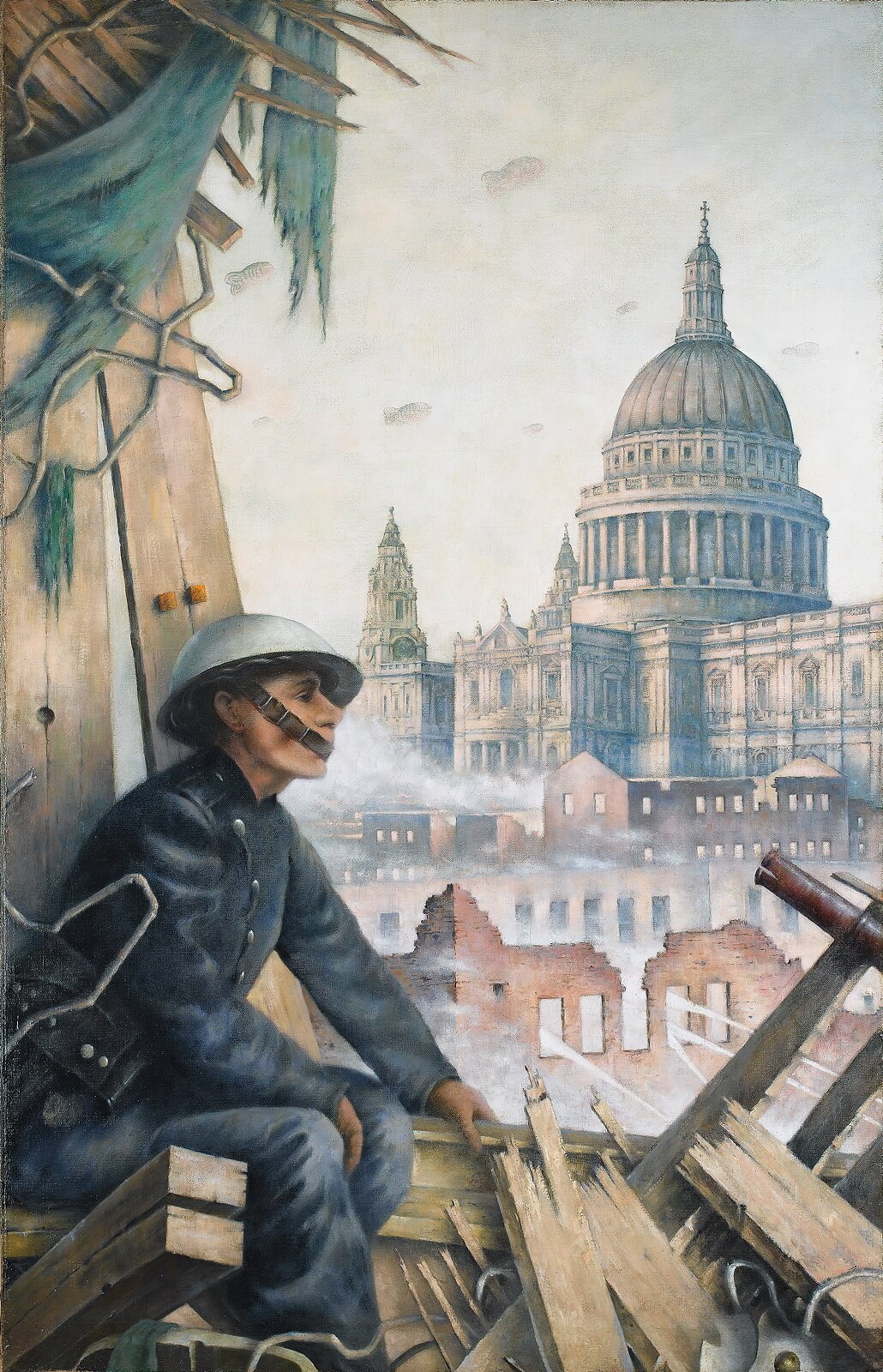 Self-portrait as an Auxiliary Fireman, c.1941

This painting shows the artist as an Auxiliary Fireman, his plastron-fronted tunic buttoning on the right side and his fireman’s hatchet in a holder attached to his belt. Potter, who had served in WW1, (enlisting in 1916 at the age of 29), would have been too old to fight in WW2, but served on the home front as an Auxillary Fireman assisting in the clean-up of bomb damage to the capital.

A British Pathe film clip from WW2 shows that many of the Auxilary Firemen who protected St. Pauls had day-jobs in the City and afterwork would change into their firemen’s uniforms in the Crypt of St Paul’s Cathedral before working through the night.

Tethered barrage balloons – 1,100 of which were moored at 100-yard intervals around St Paul’s – defended the city against dive-bombers, forcing them to fly higher and into the range of concentrated anti-aircraft fire. A British Pathe film clip from WW2 shows that many of the Auxiliary Firemen who protected St. Pauls had day-jobs in the City and after work would change into their fireman’s uniforms in the Crypt of St Paul’s Cathedral before working through the night.

Potter was one of the founder members of the Decorative Art Group in the summer of 1916 with Ethelbert White, C.R.W.Nevinson, and Carlo Norway. As a printmaker, Potter produced views of London landmarks and his dry points bear comparison to those of C.R.W. Nevinson

We are grateful to Michael Campbell, Stuart Southall, Grant Waters and Andrew Cormack for assistance. 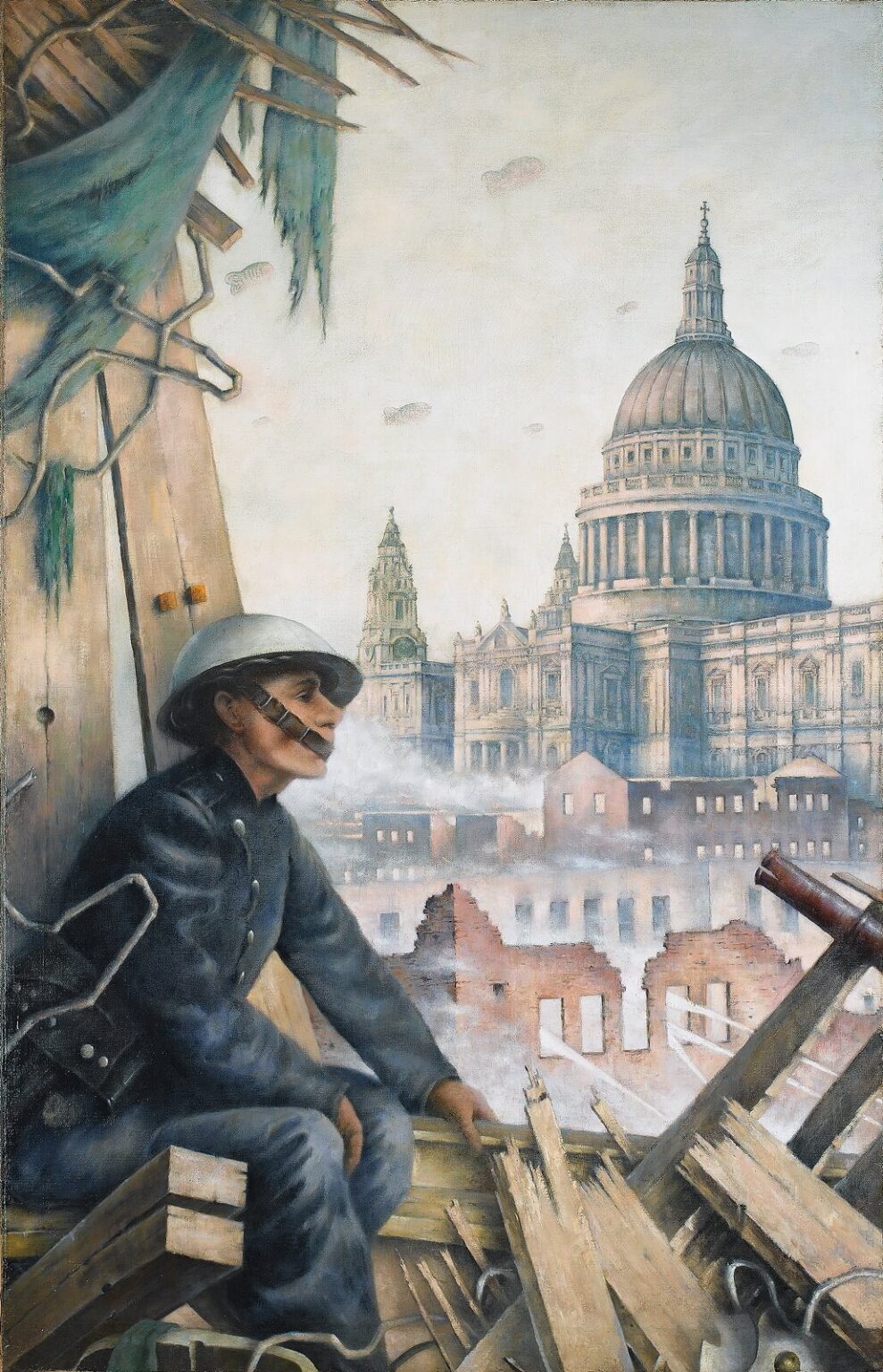 Painter born in Stoke Newington, London the son of a printer and publisher. Frank Potter as he was known studied at the Acad mie Julien in Paris but nothing is as yet known of any British art education. Potter exhibited at the Alpine Gallery in 1924 alongside Horace Brodzky; Adrian Daintrey and he also showed at the Royal Birmingham Society of Artists, International Society of Sculptors, Painters & Gravers, London Salon, New English Art Club, Royal Academy, Royal Cambrian Academy, Royal Society of British Artists, Royal Institute of Painters in Water Colours, Royal Institute of Oil Painters, Royal Scottish Academy and Walker Art Gallery, Liverpool. A member of the Chelsea Arts Club, Potter is represented by a still-life painting in the collection of Rotherham Museums and Galleries. There is a minor discrepancy over the year of his birth. His World War I service record shows his birth as 1887 yet census of that period and other authorities give it as 1885. His last RA exhibit was in 1949 A Walter F. Potter died in London in December 1958 but as yet I have not been able to verify that this is one and the same person.

We are grateful to artbiogs.co.uk for the above information. 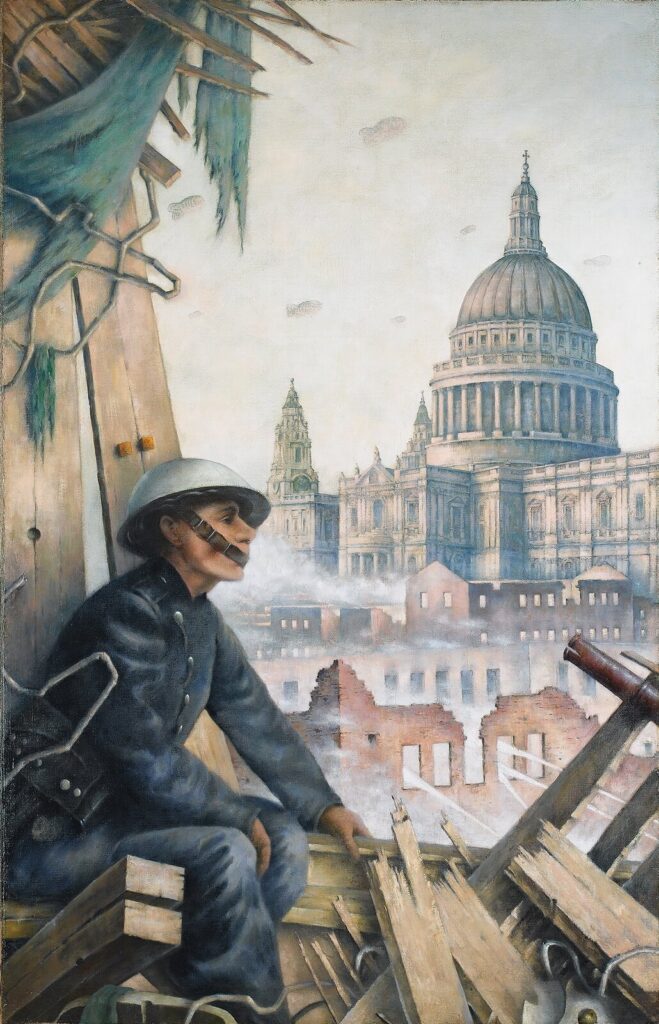