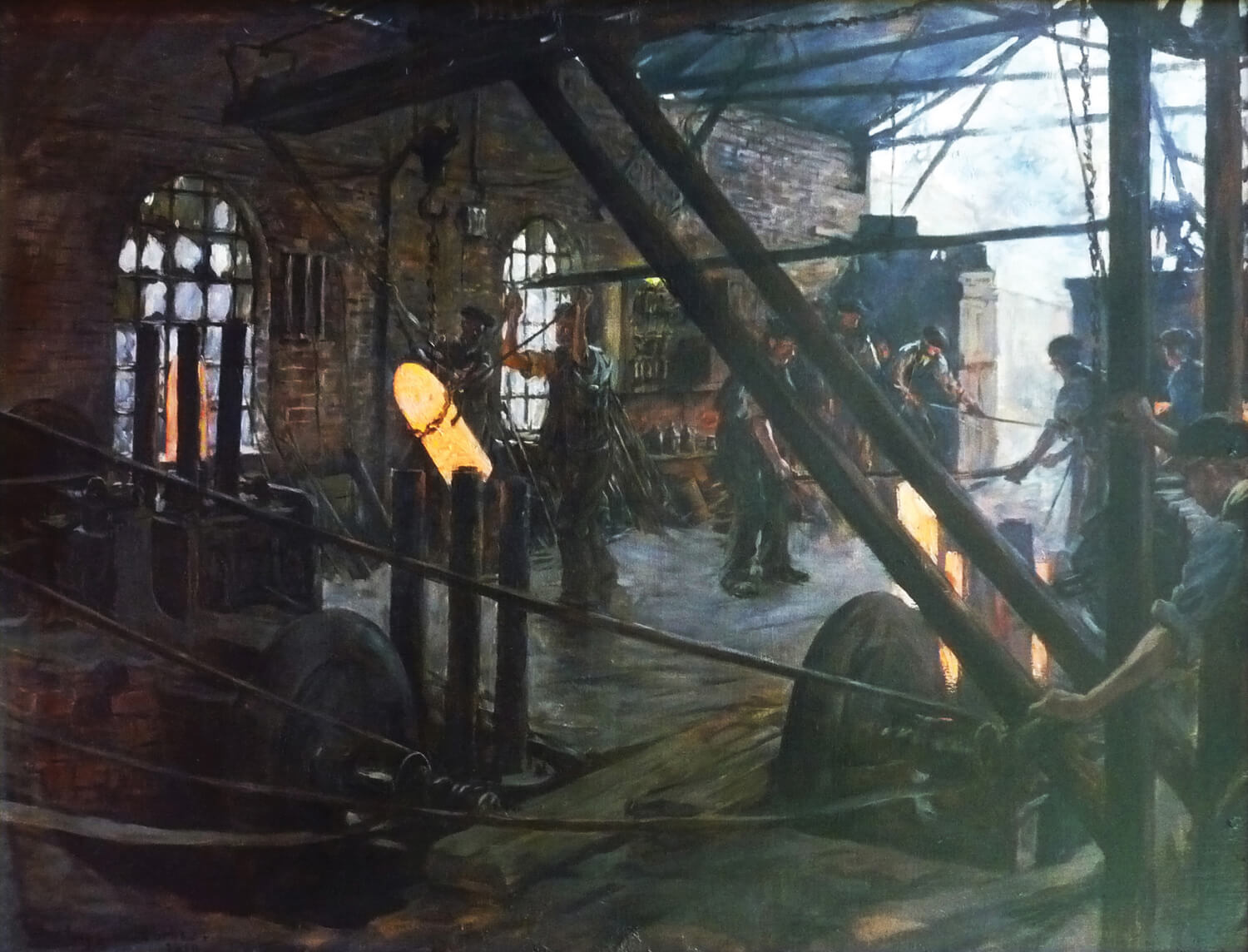 Throughout the war, Stanhope Forbes, who was too old to enlist, painted and exhibited patriotic subjects, many of which were shown at The Royal Academy: examples include Ought I to Go (No 417) and The Steel Workers (No 624) exhibited in 1919, The Smith’s Workshop (No 189) exhibited in 1917 and Shell Workers (No 367) and The Munition Girls (No 119). Many of his industrial subjects, including Shell Workers, were commissioned by Sandberg, an engineering company which wished their contribution to the war effort to be recorded for posterity.
Disclaimer:
Liss Llewellyn are continually seeking to improve the quality of the information on their website. We actively undertake to post new and more accurate information on our stable of artists. We openly acknowledge the use of information from other sites including Wikipedia, artbiogs.co.uk and Tate.org and other public domains. We are grateful for the use of this information and we openly invite any comments on how to improve the accuracy of what we have posted.

Stanhope Alexander Forbes R.A., (18 November 1857, ‘ 2 March 1947), was an artist and a founding member of the influential Newlyn school of painters. He was often called ‘the father of the Newlyn School’.

Forbes was born in Dublin, the son of Juliette de Guise Forbes, a French woman, and William Forbes, an English railway manager, who was later transferred to London.
He was married in the summer of 1889 to fellow painter Elizabeth Armstrong at Newlyn’s St Peters Church. Elizabeth died in 1912.
In 1915, Forbes remarried friend and previous student Maudie Palmer, who had been “assistant, helper and friend to the whole Forbes family.”
Schooled at Dulwich College, he studied art under John Sparkes who later taught at South Kensington School of Art. His father then worked for the Luxembourg Railway and after a period of poor health Forbes was removed from Dulwich College and studied under private teachers in Brussels. This also afforded additional time to draw. After the end of the Franco-German War, the Forbes returned to London. Dulwich College professor John Sparkes helped influence William Forbes of his son’s artistic talent, Stanhope Forbes then attended Lambeth School of Art (now the City & Guilds of London Art School).
By 1878 he attended the Royal Academy under Sir Frederic Leighton and Sir John Millais. Fellow students at the academy included Arthur Hacker, Henry Herbert La Thangue and Solomon J. Solomon. He participated in his first exhibition there.
Forbes returned to Ireland for a few months to visit Dr. Andrew Melville, family friend and Queen’s College professor. While there the men shared their appreciation of art and Forbes painted landscapes of the Galway area. He also received his first commission for a portrait. Back in London and at the age of 18, he received another commission for a portrait of a doctor’s daughter, Florence. It was exhibited at the Royal Academy in 1879.
He then studied at the private atelier of L on Bonnat in Clichy, Paris from 1880 to 1882. Henry Herbert La Thangue who also attended Dulwich College, Lambeth School of Art and the Royal Academy came to Paris, too, and studied at the Ãcole nationale sup rieure des Beaux-Arts. Arthur Hacker, a friend from the Royal Academy joined Forbes at Bonnat’s atelier. In 1881 Forbes and La Thangue went to Cancale, Brittany and painted en plein air, like Jules Bastien-Lepage, which became a technique that Forbes used throughout his career.
Having completed his studies in France, Forbes returned to London and showed works he made in Brittany at the 1883 Royal Academy and Royal Hibernian Academy shows. In 1884 he moved to Newlyn in Cornwall, and soon became a leading figure in the growing colony of artists.
Of this place, Forbes said:
I had come from France and, wandering down into Cornwall, came one spring morning along that dusty road by which Newlyn is approached from Penzance. Little did I think that the cluster of grey-roofed houses which I saw before me against the hillside would be my home for many years. What lode-some of artistic metal the place contains I know not; but its effects were strongly felt in the studios of Paris and Antwerp particularly, by a number of young English painters studying there, who just about then, by some common impulse, seemed drawn towards this corner of their native land… There are plenty of names amongst them which are still, and I hope will long by, associated with Newlyn, and the beauty of this fair district, which charmed us from the first, has not lost its power, and holds us still.
The Slip was Forbes first painting made in Newlyn. The artist colony received national attention with the Royal Academy exhibition of Forbes works in 1885. Henry Tate bought The Health of the Bride, which is now at the Tate Gallery in London. The exhibition of A Fish Sale on a Cornish Beach also brought notoriety to Forbes and the artist colony. He was one of the founders of the New English Art Club (NEAC) in 1886.
In 1892 Forbes became an Associate of the Royal Academy. Forbes was the founding chairman and trustee of the Newlyn Art Gallery beginning in 1895.
Forbes and his wife founded the Newlyn Art School in 1899. It attracted students such as Ernest and Doris “Dod” Shaw, Frank Gascoigne Heath and Jill and Geoffrey Garnier. The Newlyn area had experienced an economic downturn as the result of failing fishing, mining and farming industries. The school helped to bring an economic resurgence to the area by encouraging individuals to vacation in the area and study and practise art.
For a 1909 publish date, Forbes illustrated Mary Russell Mitford’s Sketches of English Life and Character. Some of the illustrations were Old Cronies, Bringing Home the Milk, and February Sunshine.
In 1910 Forbes was elected a Royal Academician. Forbes became a member of the St Ives Society of Artists in 1928. In 1933 he was made a Senior Royal Academician.
Forbes died in Newlyn on 2 March 1947 at the age of 89.
Go to artist page 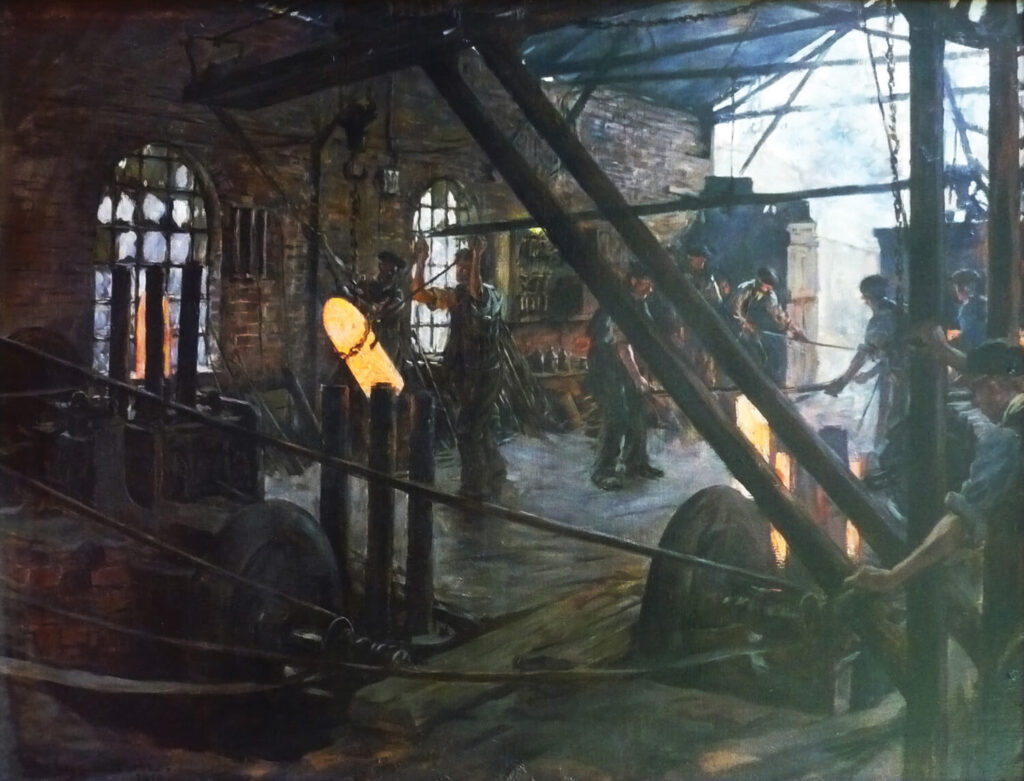