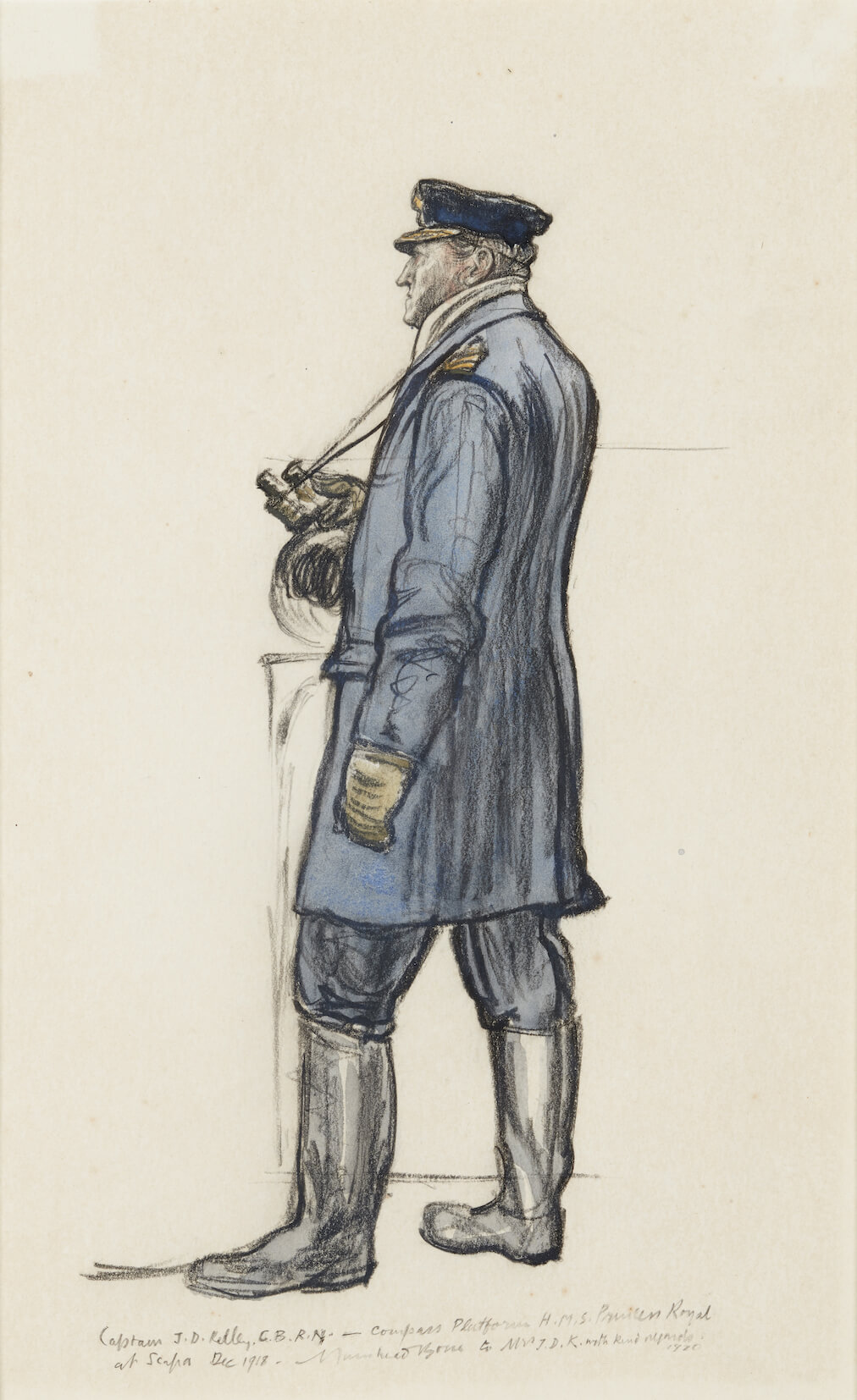 A well-known Scottish engraver established in London, Bone was the first artist to be commissioned by Charles Masterman, the head of Wellington House (the British government’s propaganda department) to ‘freely draw characteristic scenes and incidents on the Western Front’ (Dodgson, Preface, 1917).

He owed this post to his skills, his reputation as a rapid draughtsman and to an excellent recommendation from Campbell Dodgson, Keeper of the Prints and Drawings department of the British Museum, who was also working with Masterman at Wellington House. Muirhead Bone was given the rank of a Second Lieutenant and offered a six months’ renewable contract starting 12 July 1916. He retained his position until the end of the war when he received a final commission to illustrate the surrendered German fleet in Scapa after the signing of the Armistice.

As well as recording images at the Battle of the Somme and the Western Front, Bone produced a number of works showing Naval subjects from 1917-1919. Many of these show battlecruisers based on the Firth of Forth, and Bone produced images aboard the HMS Repulse, HMS Lion, and the HMS Princess Royal – where Captain John Kelly (1871-1936) was the Commanding Officer. Kelly was later Knighted, and would serve as Admiral of the Fleet in what was a prestigious maritime career. 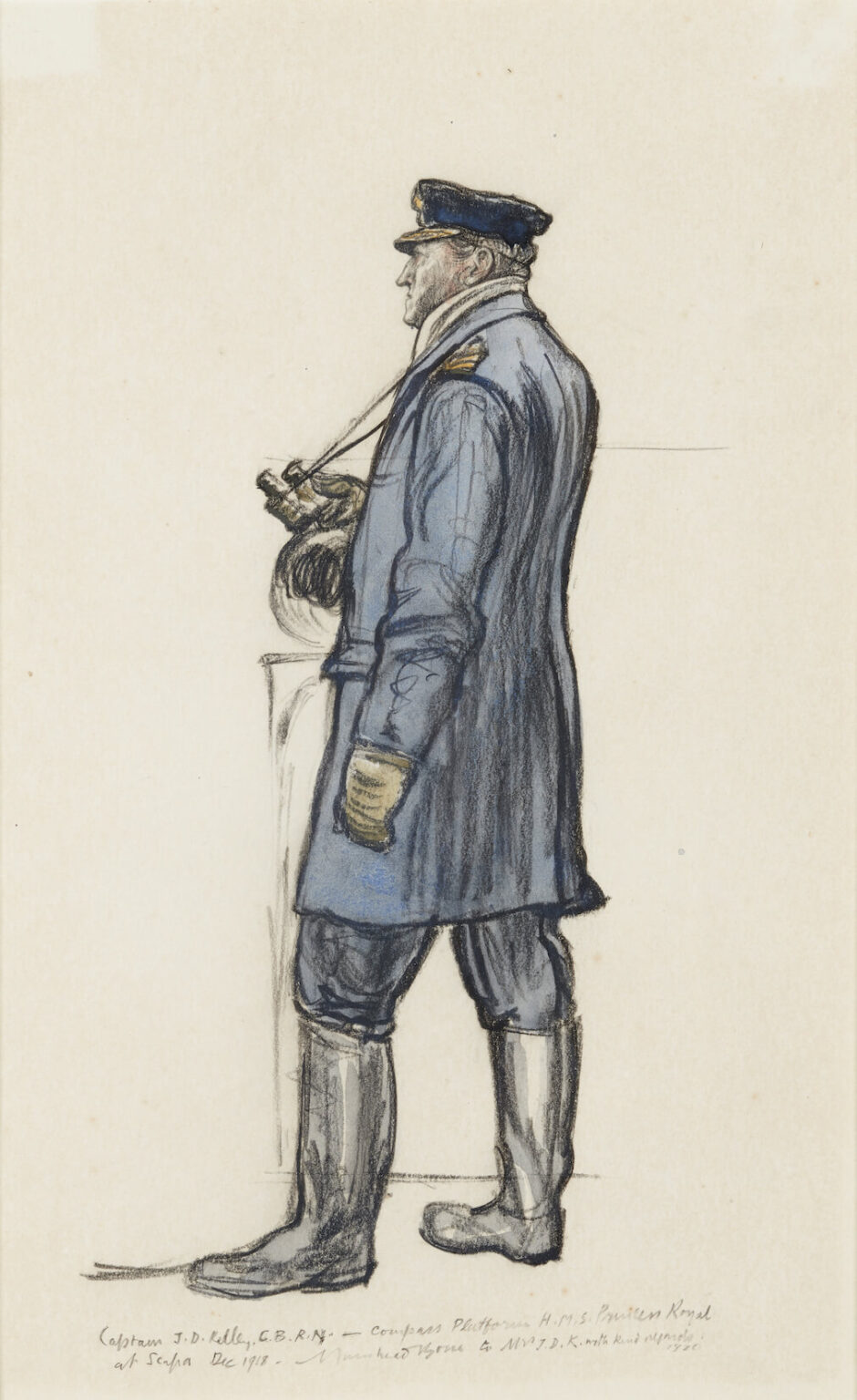 Sir Muirhead Bone (23 March 1876 ‘ 21 October 1953) was a Scottish etcher, drypoint and watercolour artist.
The son of a printer, Bone was born in Glasgow and trained initially as an architect, later going on to study art at Glasgow School of Art. He began printmaking in 1898, and although his first known print was a lithograph, he is better known for his etchings and drypoints. His subject matter was principally related to landscapes, architecture (which often focussed on urban construction and demolition sites) and industry.
In 1901 he moved to London, where he met William Strang, Dugald MacColl and Alphonse Legros, and later became a member of the New English Art Club.
Bone was also a member of the Glasgow Art Club with which he exhibited.
After the outbreak of the First World War, Charles Masterman, head of the British War Propaganda Bureau and acting on the advice of William Rothenstein, appointed Bone as Britain’s first official war artist in May 1916.
To many, Bone had the ideal credentials for this official appointment and, although thirty-eight years old at the outbreak of war, he was rescued from certain enlistment by the intervention of those in the art establishment who recognized what an asset his work might be as pictorial propaganda for the Allied cause. Furthermore, Bone worked almost exclusively in black and white; his drawings were invariably small and their realistic intensity reproduced well in the government-funded publications of the day. Where some artists might have demurred at the challenge of drawing ocean liners in a drydock or tens of thousands of shells in a munitions factory, Bone delighted in them; he was rarely intimidated by complex subjects and whatever the challenge those who commissioned his work could always be sure that out of superficial chaos there emerged a beautiful and ordered design.

Commissioned as an honorary Second Lieutenant, he arrived in France during the Battle of the Somme, serving with the Allied forces on the Western Front and also with the Royal Navy for a time. He produced 150 drawings of the war, returning to England in October of that year. Over the next few months Bone returned to his earlier subject matter, drawing pictures of shipyards and battleships. He visited France again in 1917 where he took particular interest in the ruined towns and villages.
After the Armistice, Bone returned to the type of works he produced before the war, and was influential in promoting fellow war artists William Orpen and Wyndham Lewis. He began to undertake extensive foreign travels which increasingly influenced his work. In 1923 he produced three portraits of the novelist Joseph Conrad during an Atlantic crossing. In the inter-war period he exhibited extensively in London and New York, building up a considerable reputation. He received a knighthood in 1937.
Bone served again as official war artist in the Second World War from 1940, being commissioned in 1940 into the Royal Marines as a Major.
Sir Muirhead Bone died in 1953 in Oxford. His final resting place is in the churchyard adjacent to the St. Mary’s Church Whitegate at Vale Royal parish in Cheshire; and he has a memorial stone in St. Paul’s Cathedral in London. 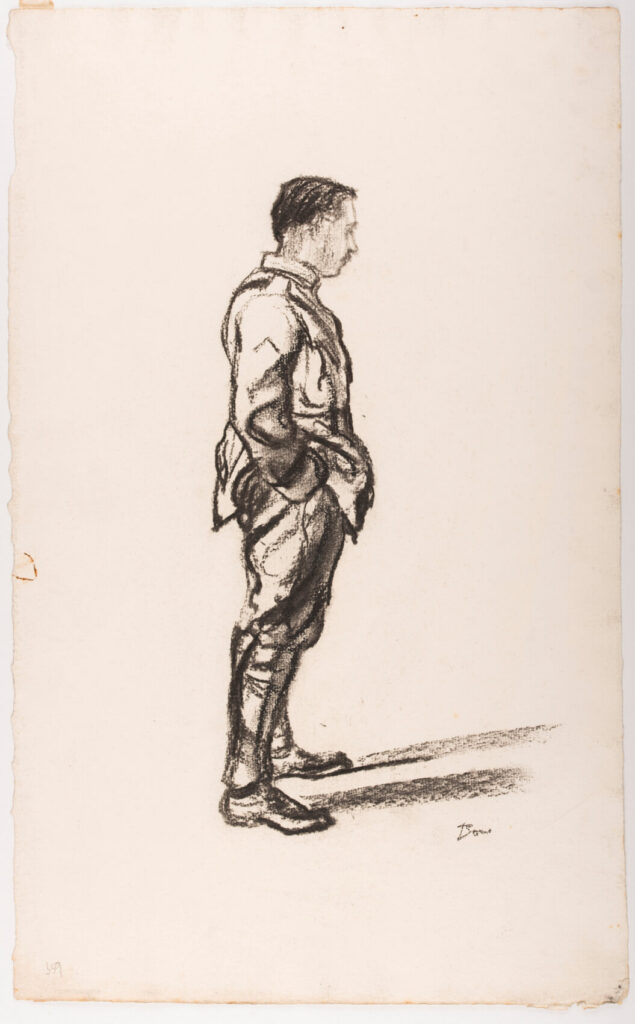 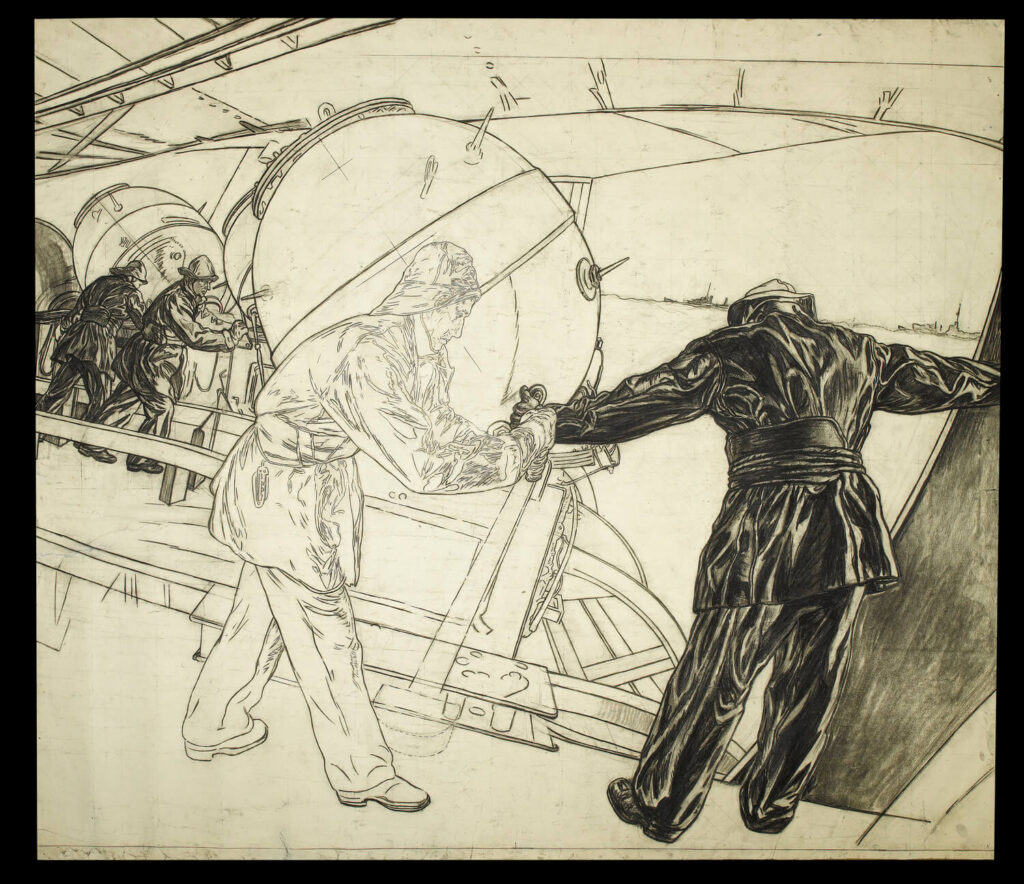