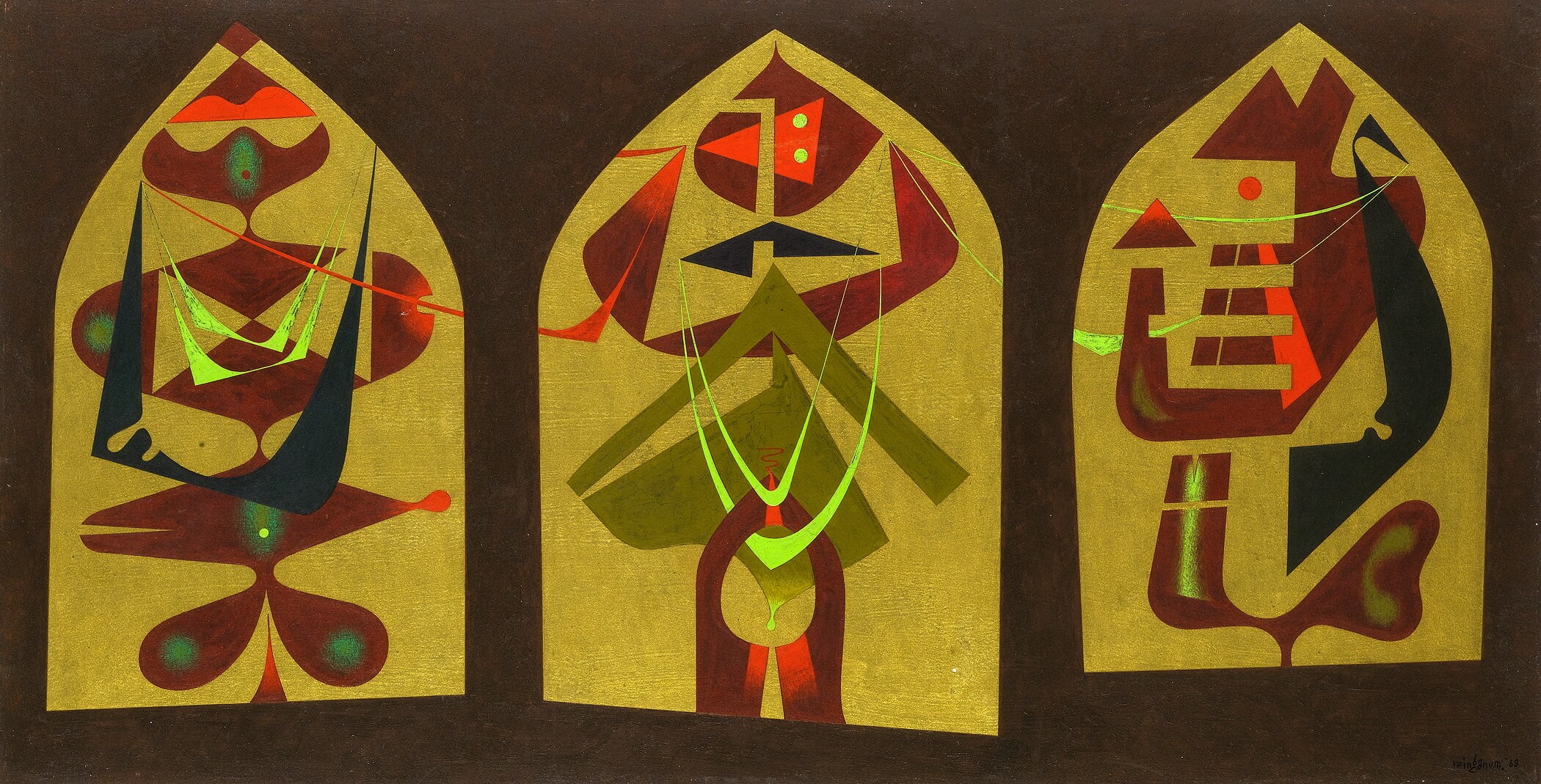 In a brown shadow box frame.

Reinganum attended the
Academie Julian in Paris and was one of Leger’s six private students in
his studio in Montmartre. On his return to London in 1926, Reinganum
took his portfolio to Maurice Gorham, the art editor of the Radio Times,
who bought one of his drawings on the spot and started Reinganum on his
freelance career as illustrator. During the 1930s and 1940s, together
with Eric Fraser, Reinganum became responsible for the style of the
Radio Times. His association with the Radio Times was to continue for 40
years. The discipline that this work demanded, the speed and accuracy
with which he had to absorb information and interpret it, informed his
painting and graphic design.

In 1926, with Nicolas Bentley,
Reinganum formed the Pandemonium Group, a loosely knit group of “bright
young things” that held regular exhibitions at the Beaux Arts Gallery,
where they began their tentative experiments with abstraction.

Reinganum
disliked categories, both of medium and style, and did his best to
avoid them. His paintings were exhibited under the banner “abstraction”
but, gradually, the world at large dubbed him a Surrealist and he was
swept up in the wave of British Surrealism exhibitions in the 1970s. His
paintings have been shown in 20 exhibitions with “Surrealism” in their
title, together with other members associated with the movement that
included: Edward Burra, Eileen Agar, Merlyn Evans, Conroy Maddox,
Tristram Hillier, John Piper and Roland Penrose. 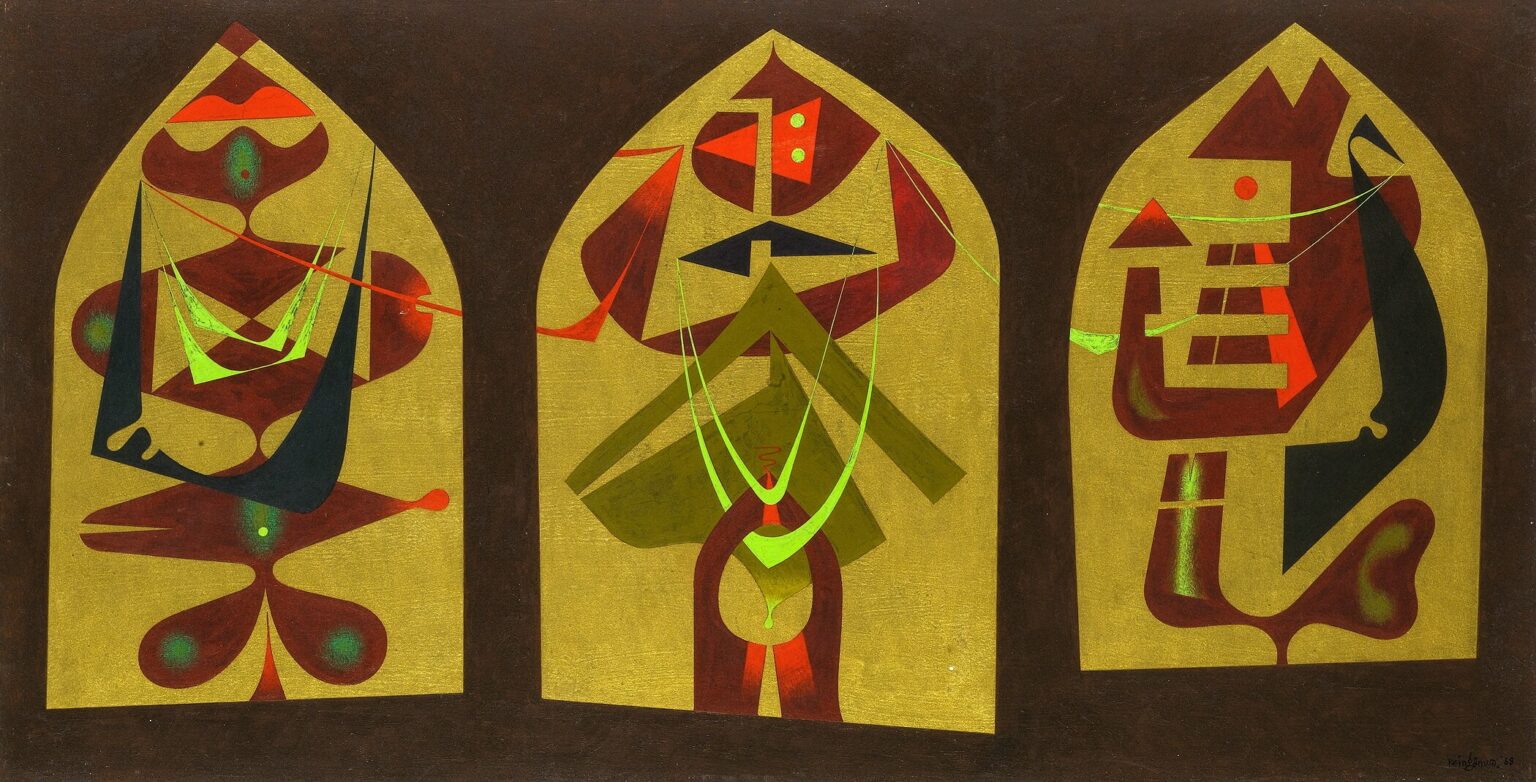 Victor Reinganum (1907-1995) was an artist and illustrator, probably best known for his illustrations on book dustjackets, including the first editions of Muriel Spark’s The Ballad of Peckham Rye (1960) and The Prime of Miss Jean Brodie (1961).

During 1925-1928 he studied at Heatherley School of Fine Art and the Acad mie Julian, Paris, also taking private lessons with L ger. In 1928 he joined Elstree Studios and was an art director there until 1929 when he became a freelance illustrator. He was a prolific contributor to Radio Times.

The book Surrealism in England – 1936 and After (1986) says of him:
“VICTOR REINGANUM is Surrealist on the outside or not at all – Born London 1907 – Never a member of any Surrealist group, his work shared a certain terrain with Tunnard, a poetic abstraction on the frontiers of figuration often using biomorphic forms. Originally more known for his illustrations, latterly he has had other works included in retrospective Surrealist shows.” 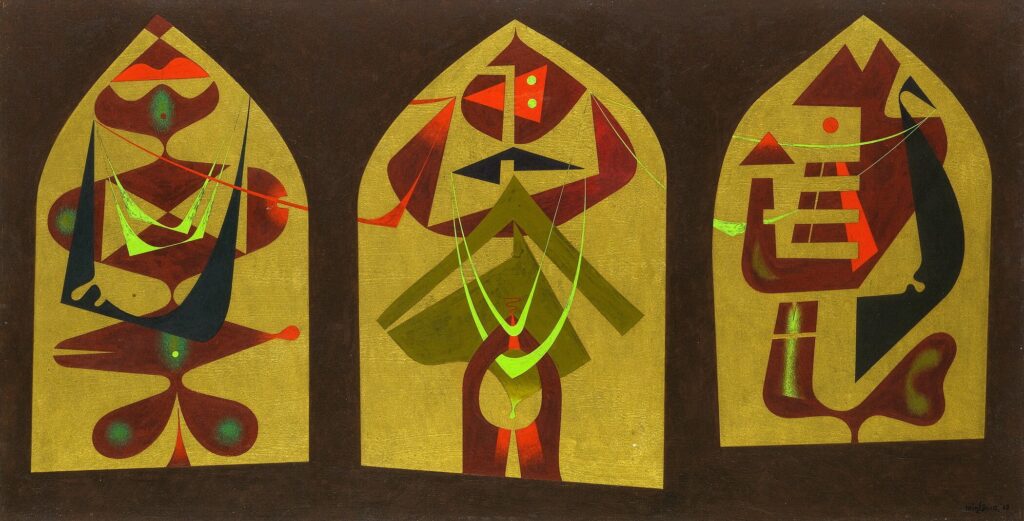