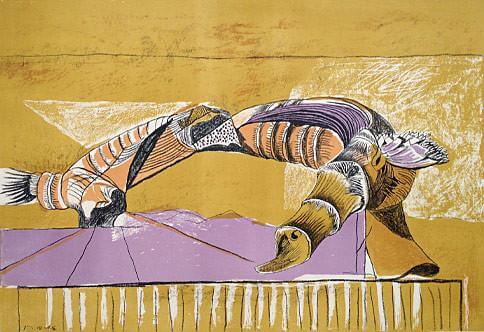 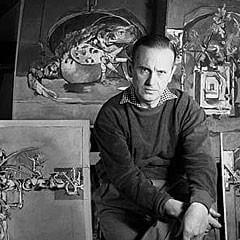 Painter, born Streatham, London. Originally intended for a career in engineering, in 1920 he was apprenticed at the Midland Railway Works at Derby. Soon after he ;eft and went on to study at Goldsmiths’, 1921-26, where he specialised in etching in a style indebted to Samuel Palmer and in 1925 he was elected a member of the Royal Society of Painter-Printmakers. The sudden collapse of the print market after the Wall Street Crash in 1929 obliged him to earn money by designing posters, china, glass and fabric and about this time he also took up painting. In 1934 Sutherland made his first visit to Pembrokeshire which he revisited every summer until the outbreak of World War II. There, his earlier interest in Samuel Palmer combined with his sense of ‘encompassing disquiet’ to produce visionary drawings and paintings that had an important influence on the neo-romantic artists at the 1940’s. About this time he entered a Surrealist phase and in 1936 he exhibited in the International Surrealist Exhibition in London.

During the war he worked as an Official War Artist, drawing scenes of devastation, blast furnaces, tin mining and quarrying. After the war he spent part of each year in the South of France which affected his appreciation of colour. In 1952 he was commissioned to design a vast tapestry for the new Coventry Cathedral that had been destroyed in the enemy bombing. He also began to paint portraits these further enhanced his reputation which, in Britain, was at its height in the 1950’s. His most famous portraits were Somerset Maugham, 1949 and a few years later his painting of Winston Churchill, 1954. Grossly disliked by the family it was destroyed on the instructions of Clementine Churchill although several studies have survived.
Although honours and awards continued to be bestowed on him, he received more critical acclaim in Italy than in Britain during his last twenty years. Sutherland was the first President at the Blackheath Art Society in 1947. His work is held in collections in major museums around the world. These include Abbot Hall Art Gallery, ACGB, Bolton Art Gallery, Brighton and Hove Museums and Art Galleries, BMAG, Bristol Museum and Art Gallery, BC, Cheltenham Art Gallery, Doncaster Museum Service, Fitzwilliam Museum, Glasgow Museums, GAC, Harris Museum and Art Gallery, Hepworth Wakefield, Herbert Art Gallery, Imperial War Museum, Kirklees Museums and Galleries, Leeds Museums and Galleries, Leicester Arts and Museums Service, Museum of London, NMNI, NPG, NMW, Northampton Museum and Art Gallery, Norwich Castle Museum, Pallant House Gallery, Potteries Museum and Art Gallery, Rugby Museum and Art Gallery, Rye Art Gallery, Southampton Art Gallery, Stirling University Art Collection, Swindon Art Gallery, Tate Gallery, University of Warwick Art Collection and Whitworth Art Gallery, Manchester.
Sutherland exhibited in the British Pavilion at the Venice Biennale in 1952 and there were major retrospective exhibitions at the ICA in 1951, the Tate Gallery in 1982, the Mus e Picasso, Antibes, France in 1998, and the Dulwich Picture Gallery in 2005. A major exhibition of rarely seen works on paper by Sutherland, was held at MoMa, Oxford in 2011. He was awarded the Order of Merit in 1960.
With thanks to artbiogs.co.uk
Go to artist page