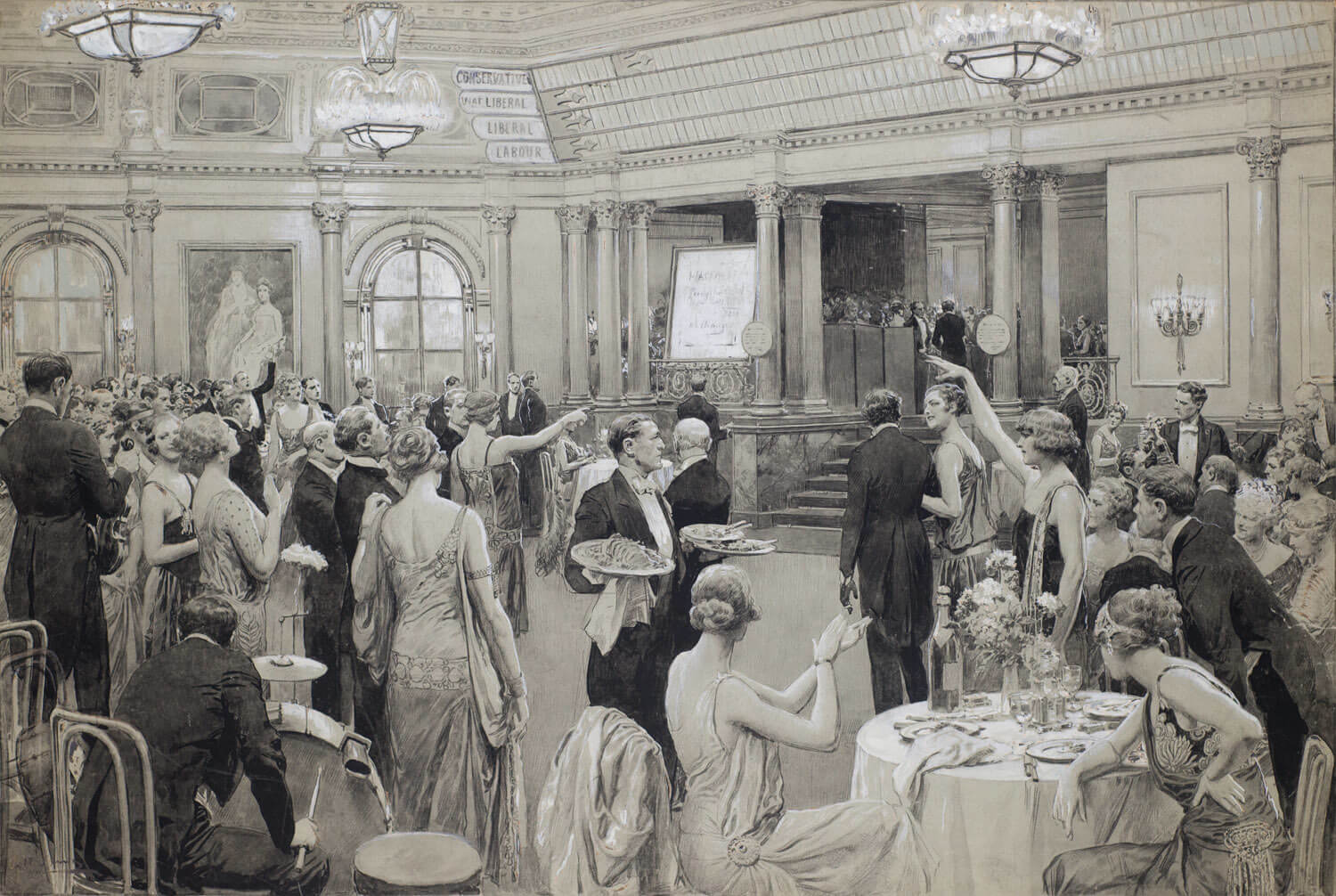 Upper class diners at The Savoy on election night, 1922

Provenance:
From the archives of the illustrated London News; Christies 7.10,.2014, lot 20
Presentation:
framed

In 1904, Matania joined the staff of The Sphere where some of his most famous work was to appear, including his illustrations of the sinking of the Titanic in 1912.   His reputation was further enhanced by WW1 through which he became  acclaimed for his graphic and realistic images of trench warfare. 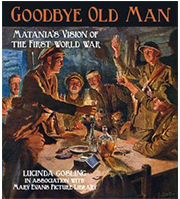 IN 1922 The BBC was founded as the British Broadcasting Company. Bonar Law became Prime Minister, replaced by Stanley Baldwin in May 1923.

Max Beerbohm’s collection of caricatures, Rossetti and His Circle, is published in London.

William Orpen ‚Äì To the Unknown British Soldier in France[3] 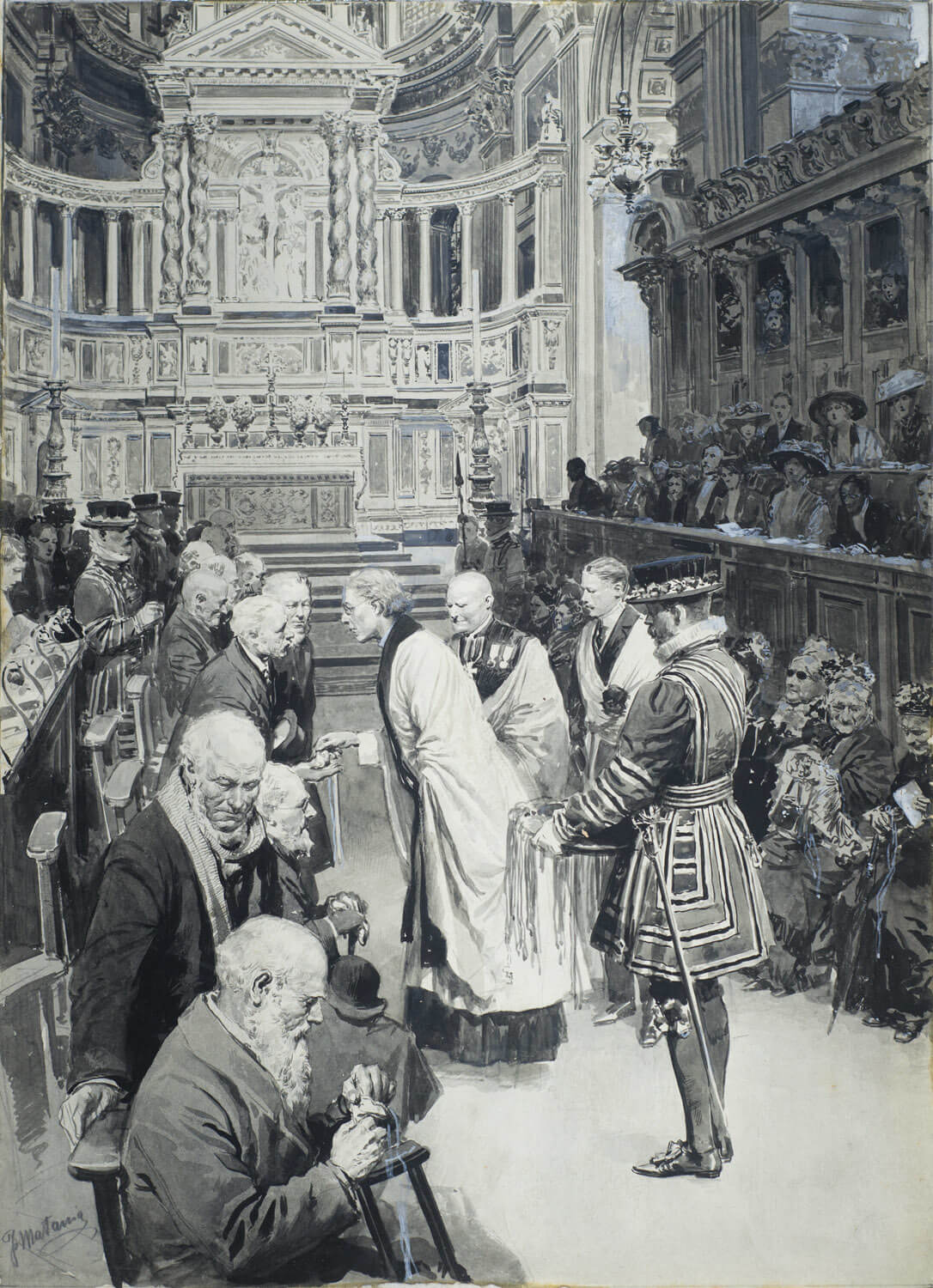 Fortunino Matania was an Italian artist noted for his realistic portrayal of World War I trench warfare and of a wide range of historical subjects.

Born in Naples, the son of artist Eduoardo Matania, Fortunino Matania studied at his father’s studio, designing a soap advertisement at the age of 9 and exhibiting his first work at Naples Academy at 11. By the age of 14 he was helping his father produce illustrations for books and magazines. His talent was recognised by the editor of the Italian periodical L’Illustrazione Italiania and Matania produced weekly illustrations for the magazine between 1895 and 1902.
At the age of 20, Matania began working in Paris for Illustration Francaise and, in 1902, was invited to London to cover the Coronation of Edward VII for The Graphic. Matania would subsequently cover every major event ‘ marriage, christening, funeral and Coronation ‘ of British royalty up to the coronation of Queen Elizabeth in 1953.
In 1904, Matania joined the staff of The Sphere where some of his most famous work was to appear, including his illustrations of the sinking of the Titanic in 1912. Around 1906 to 1910 he painted the life in the lobby of the Hotel Excelsior in Rome.
The Last General Absolution of the Munsters at Rue du Bois by Matania depicting the regiment on the eve of the Battle of Aubers Ridge in May 1915
At the outbreak of the First World War, Matania became a war artist and was acclaimed for his graphic and realistic images of trench warfare. His painting for the Blue Cross entitled Goodbye, Old Man, showing a British soldier saying farewell to his dying horse, is a fine example of his emotive work. His painting of the Green Howards including Henry Tandey is a central part of a famous story.
But it was after the war, when he switched to scenes of ancient high life for the British woman’s magazine, Britannia and Eve, that Matania found his real career. He filled his London studio with reproductions of Roman furniture, pored over history books for suitably lively subjects. Then, with the help of models and statues, he began to paint such subjects as Samson & Delilah, the bacchanalian roisters of ancient Rome, and even early American Indian maidens – all with the same careful respect for accuracy and detail he had used in his news assignments.
Generally he managed to include one or two voluptuous nudes in each picture. “The public demanded it,” says Matania. “If there was no nude, then the editor or I would get a shower of letters from readers asking politely why not.” He was a standard in Britannia and Eve for 19 years.
Matania exhibited regularly at the Royal Academy and Royal Institute of Painters in Water Colours, in 1917 he was elected a member of the latter. From 1908 and his work appearing in most of the principal magazines in Britain and America, including Illustrated London News, London Magazine, Nash’s, Printer’s Pie and others. When Britannia and Eve was launched in 1929, Matania became one of its first contributors. For 19 years, he wrote and illustrated historical stories for the magazine. His talents made him a popular illustrator for advertising, posters and catalogues, working for Ovaltine, Burberry’s (the sporting outfitters) and many others. Matania was also recommented to Hollywood director Cecil B. DeMille and produced a number of paintings of Rome and Egypt from which authentic designs could be made for the movie The Ten Commandments.
Towards the end of his life, Matania illustrated features for the educational weekly Look and Learn and was working on the series A Pageant of Kings at the time of his death.
Go to artist page 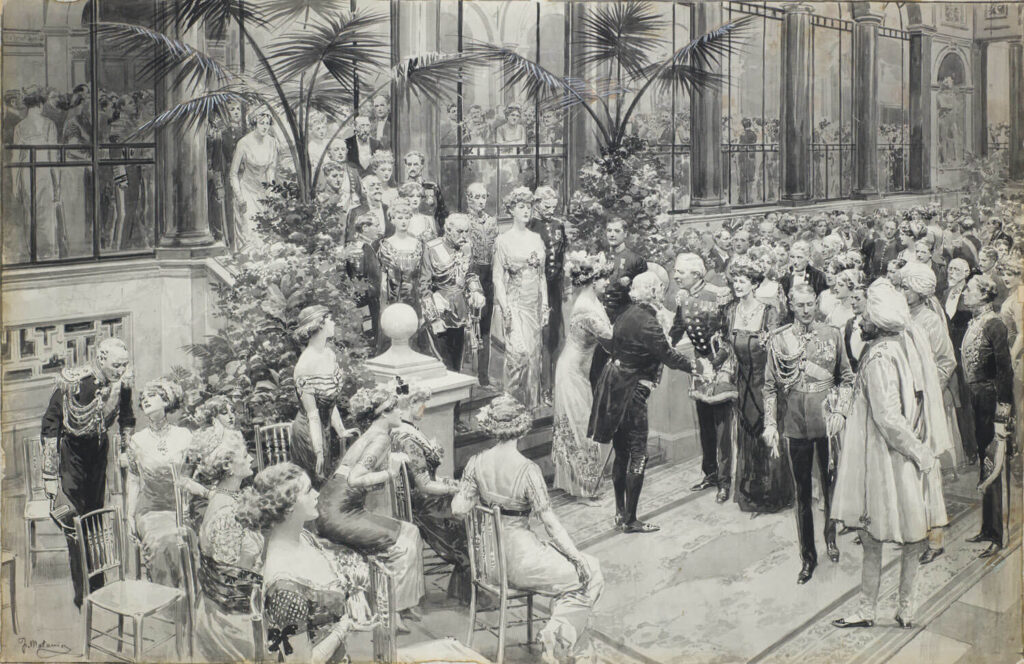