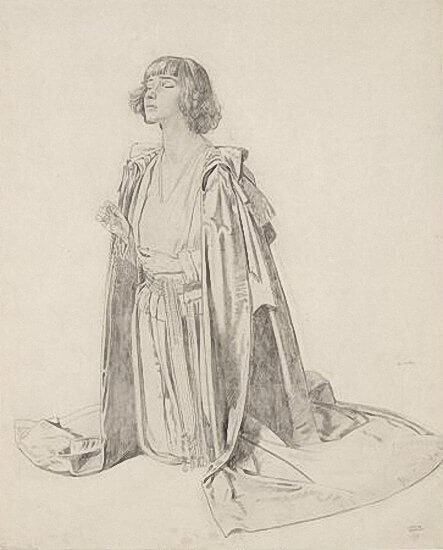 All three paintings were preceded by preparatory drawings of exceptional precision and sensitivity.The model for this drawing is believed to be Connie Martin,a professional artist’s model, living at the time at 258 Kings Road, Chelsea.The same pose is found in a number of Orpen’s paintings, including early studies for The Western Wedding and, in his later work, Palm Sunday 1931. Orpen was possibly inspired by the figure of Mary in Piero della Francesco’s The Nativity c.1483-4 (National Gallery, London), and drew inspiration from that artist for all three of his Irish allegorical works.

According to the artist’s studio account book, this study, referred to as ‘Kneeling Figure of Woman … for Well√≠,was originally intended for Mr Vivian,although it in fact appears to have been acquired directly from Orpen by Mrs Howard (Florence Evelyn) St George,with the finished picture.

The above notes have been extracted from an essay written by Christopher Pearson, the unabridged version of which can be read in the biography link. 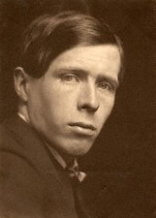 Sir William Newenham Montague Orpen, Irish-born British portrait painter. He studied art at the Metropolitan School and at the Slade School in London where, at the time, great emphasis was put on the study of old masters.
Born in Stillorgan, County Dublin, William Newenham Montague Orpen was a fine draughtsman and a popular painter of the well-to-do in the period leading up to World War I. He was also involved in the Celtic revival in his native Ireland and he took part in the attempt there to find a visual counterpart to the birth of new national literary language (McConkey 2005). Although his studio was in London, he spent time in Ireland painting, he was a friend of Hugh Lane and influenced the Irish realist painters, like Sean Keating, who were beginning their careers at that time.

Like Sir John Lavery, William Orpen was made an official war painter of the First World War and in 1917 he travelled to the Western Front. He produced drawings and paintings of privates, dead soldiers and German prisoners of war along with official portraits of generals and politicians. Most of these works, 138 in all, are in the collection of the Imperial War Museum in London.

He was deeply affected by the suffering he witnessed in the war and his To the Unknown British Soldier Killed in France first exhibited in 1923 showed a flag draped coffin flanked by a pair of ghostly and wretched soldiers clothed only in tattered blankets. Although widely admired by the public, this picture was attacked by the press and Orpen painted out the soldiers before the painting was accepted by the Imperial War Museum in 1927.
According to Bruce Arnold, writing in Irish Art a Concise History:
“. . . while at times his portraits are rather shallow, he was capable of excellent and sympathetic work, particularly in family and group portraits.”

The same author notes Orpen’s interest in self-portraits and his self-portraits are often searching and dramatic. In his The Dead Ptarmigan -a self-portrait in the National Gallery of Ireland he scowls from the frame while holding a dead ptarmigan at head height.
In a review of an Orpen exhibition at the Imperial War Museum in London, Kenneth McConkey (2005) attributes this shallowness of Orpen’s portraits to an emotional exhaustion, a result of what he witnessed as a painter of war; he writes of Orpen’s post war activity:
“Now the portraits were done with mechanical efficiency, and without pause for reflection, save when he scrutinised himself and found a face he could no longer understand. his face… grimaces, it squints, it scowls; in the 1920s it papers over the inner turmoil left by the long pathetic queues of gas-blinded tommies.
Sir William Orpen died, aged 53, in 1931 in London.