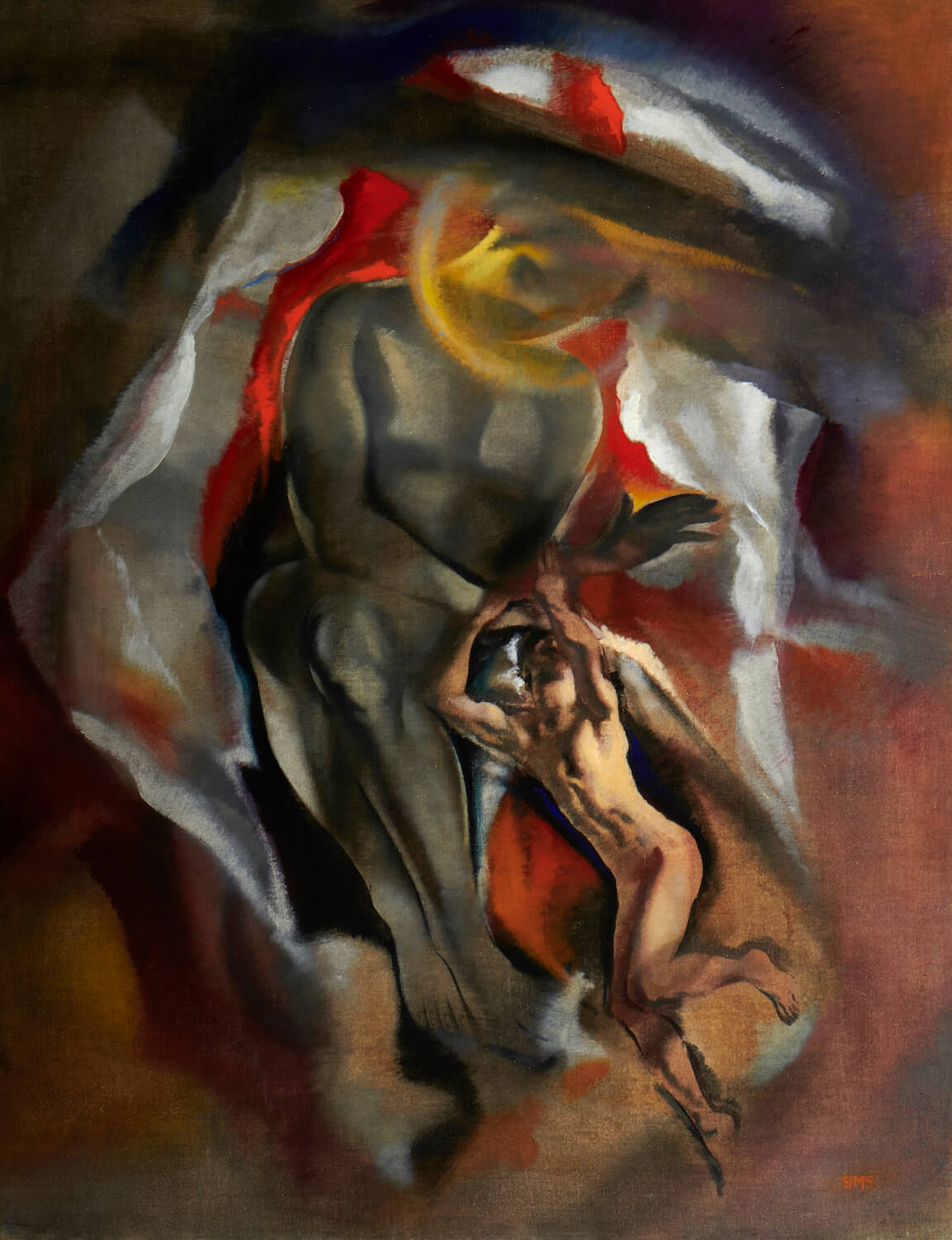 My Pain Beneath Your Sheltering Hand, c.1928

This painting belongs to a small series of works that Charles Sims called his Spiritual Ideas’. Tragically, the artist committed suicide just weeks after completing them, and having submitted six for inclusion at the Royal Academy Summer Exhibition of 1928.

Grouped together in Gallery XI, Timothy Wilcox writes that the paintings were among the most advanced, stylistically, that the Royal Academy had ever seen.’ This was an opinion echoed by commentators of the time, with one reviewer stating that the paintings struck a deeper and a more intense note than anything else at the Academy’ (‚ÄúRoyal Academy‚Äù, The Times, 5 May 1928). The critic from the Western Mail called them the sensation of the year’ (5th May, 1928), whilst another noted that it was impossible at times to get near the pictures because of the crowds’ (Aberdeen Press and Journal, 5th May, 1928).

In a longer review for the Mail, Fred A. Farrell speaks of the genius’, and startling volte force’ of the series.

In life, Sims’ work was mainly on scholarly but orthodox lines. In his death he has left the world in his last
pictures a problem which no one but himself can solve’. The Mail, 5th May 1928, p. 8

There was a widespread assumption at the time that Sims was suffering from some sort of mental illness when he painted these pictures, which was only reinforced by the fact of his suicide. His depression was too much of a taboo to be mentioned openly, and was addressed only by Frank Rutter, critic of The Sunday Times, who broached it on sympathetic terms: ‚Äúto suggest that there are traces of mania in these last and most beautiful works from his brush betrays a lamentable lack of understanding.‚Äù 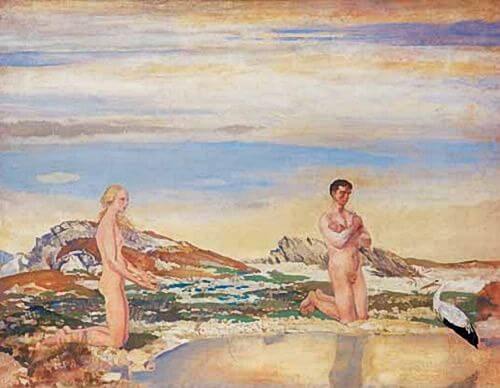 Sims painted portraits, landscapes, and decorative
paintings. He was one of that group of artists who continued to treat symbolic
and romantic themes after the First World War.

He received his art education in
in the South Kensington and ,
and in in
the ateliers of Julian and Baschet. His continental training probably
accounts for his fluent handling of paint, and his confident treatment of space
and atmosphere. These qualities rapidly gained him critical and academic
success. A picture was bought for the
gallery of modern art, the Luxemburg, in 1897 and for the public gallery in
in 1902. He held a highly successful one man show at the Leicester Gallery in
1906, and ‘The Fountain‘ was bought for the Chantrey Bequest in 1908.
Academic honours followed. He was elected Associate of the
in 1908, Associate of the Royal Watercolour Society in 1911, Member of the
Royal Watercolour Society in 1914 and Royal Academician in 1915. He became
keeper of the Royal Academy Schools in 1920.

The First World War proved to be a traumatic experience for
Sims, from which he never recovered. His eldest son was killed and he was
unbalanced by what he witnessed in where he was sent as a war
artist in 1918. His subsequent paintings often show signs of the mental
disturbance which led him to resign his post at the Royal Academy Schools in
1926. In 1928, Sims committed suicide. A study of his life by one of his sons
appeared in 1934, and a selection of his work appeared in the Last Romantics
exhibition (Barbican Art Gallery, London 1989). 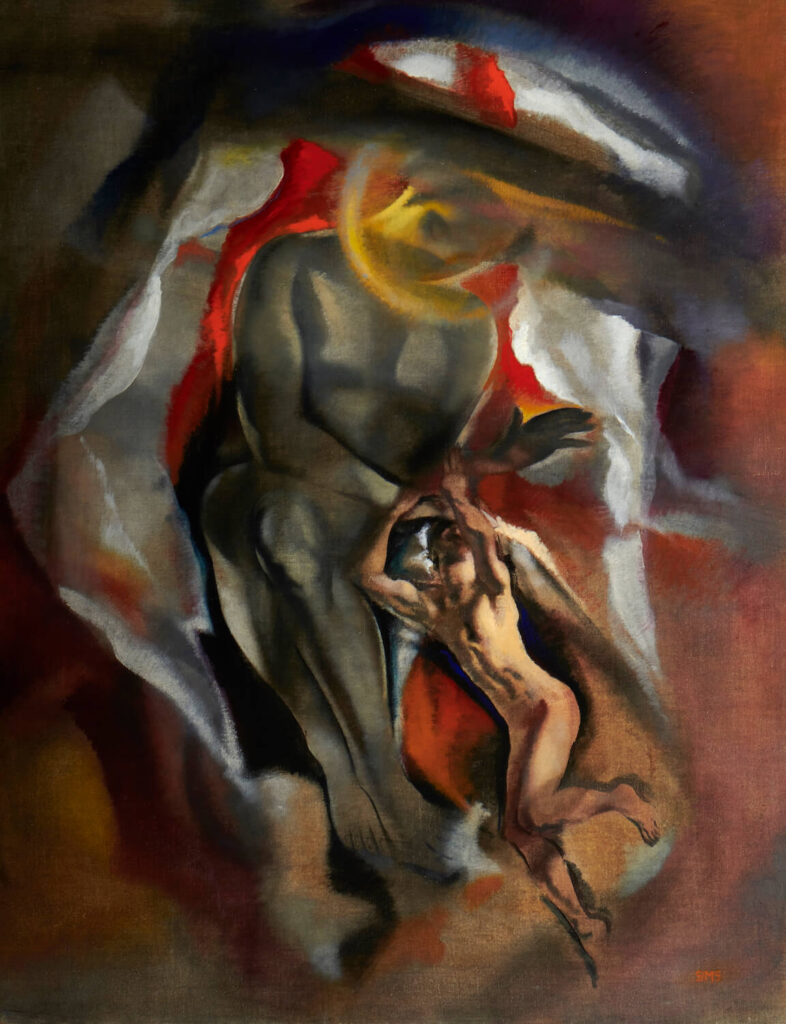 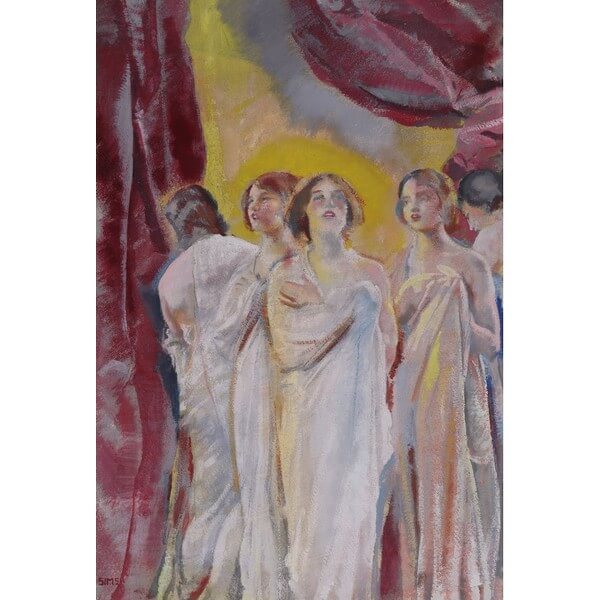