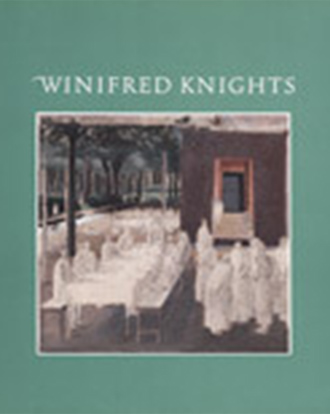 Winifred Knights exhibited her work with reluctance, and a retrospective exhibition of her major paintings would total seven in number. She worked inordinately slowly, with consummate care: nothing in her work was left to chance, everything was prepared and thought out. Her reluctance to exhibit was not related to strong self-criticism, indeed the opposite would be true: her son John remembers her total confidence in her work.
She attended the Slade School of Art, London, from October 1915 to July 197, when she won the Second Prize for Figure Drawing. During this period she began to be recognised as an outstanding draughtswoman. In 1920 became the first woman to win the prestigious Prix de Rome.

Winifred Knights
Study of a Seated Woman for The Santissima Trinita
£3,000.00

Winifred Knights
Study for St Martin altarpiece, angel from the waist down
£3,000.00

Winifred Knights
Landscape study for Santissima Trinita, circa 1924
£18,500.00
Back to Publications