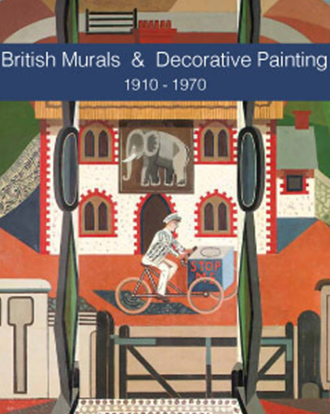 The murals that were produced in this country in the twentieth century remain as one of the great inventive achievements in modern British art. Highly original in their approach to design, balancing varying degrees of modernity or tradition, they demonstrate the creative drive of their makers and contain singular expressions of the aesthetic, personal and social concerns that typify the ages from which they come. Some are celebrations of simple human pleasures, perhaps to decorate a refreshment room, an ocean liner or a dining room. Others are intended to be the highest expressions of their art, ambitious allegorical or decorative compositions that like the frescoes of the Renaissance would speak through the ages to later generations. The individuals and committees who commissioned them similarly believed they would both represent the best that Britain had to offer and mark the high accomplishment of contemporary society, elevating the public and private spaces they occupied and inspiring moral purpose.

John Armstrong
Suggested Design for The Pleasure of Living, Shell Centre London Circa 1961
£2,150.00

Frank Brangwyn
The Printed Word Makes the People of the World One, mural for the entrance hall of Odham Press, London, 1935-36
Forthcoming

Barbara Jones
Out in the Hall, 1960
Sold

John Armstrong
Suggested Decoration for The Pleasures of Living mural, Shell Centre, circa 1961
£2,510.00

Charles Mahoney
Compositional study for The pleasures of Life at Morley College, 1928-30
£3,960.00
Forthcoming

Jean Clark
Study for the Committee Room of the London Bankers Clearing House, 1958

Stanley Lewis
Study for the Central Group of Allegory, c. 1929

Claude Francis Barry
The Heart of the Empire: Our Finest Hour, 1940
Sold

Sir Thomas Monnington
Study for The Fifth Station, The Cross is laid upon Simon of Cyrene, circa 1960
Forthcoming

Charles Mahoney
Study for The Birth of the Virgin, c. 1942
Forthcoming

Charles Mahoney
Study for Fortune & the Boy at the Well, mural at Brockley County School, 1933

Charles Mahoney
Design for the wall above the altar at Campion Hall, Two Angels Overlooking a Garden
£9,500.00

Charles Mahoney
Design for the altar wall, Annunciation in an allotment, circa 1942
£7,750.00
Sold

Charles Mahoney
The Birthday Party, circa 1957
Back to Publications