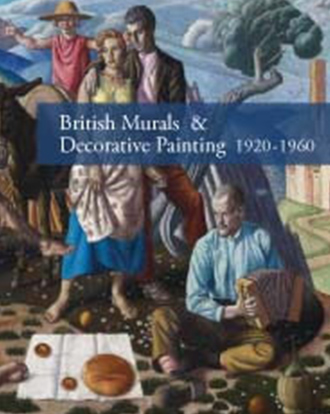 This book is illustrated with a series of specially commissioned photographs that record some of the least known but most remarkable mural cycles in Great Britain. In the vast majority of cases these works have previously only been reproduced in black and white if at all. Today murals are rarely seen as the artist intended. Often they are partially obscured, especially where there has been a change of building use. Frequently works are completely covered up or painted over examples include murals by Mary Sargent Florence, Mary Adshead, Eric Ravilious, Dora Carrington, William Roberts and Gilbert Spencer. Where murals survive they are more often than not displaced works. Historic photographs showing John Piperís The Englishmanís Home at The Festival of Britain, in situ on the river side of the Homes and Gardens Pavilion on Belvedere Road, come as a revelation; a digital reconstruction of Frank Brangwynís Empire panels for The House of Lords, seen in situ as they were originally intended, gives a dramatically more favourable impression than their final installation in The Brangwyn Hall, Swansea.

The Birthday Party, circa 1957

Design for the wall above the altar at Campion Hall, Two Angels Overlooking a Garden

Design for the altar wall, Annunciation in an allotment, circa 1942

Study of a grumpy cherub, for Campion Hall, early 1940’s

Study for Fortune & the Boy at the Well, mural at Brockley County School, 1933

Study for The Fifth Station, The Cross is laid upon Simon of Cyrene, circa 1960

Design for Students Union, University of London, circa 1969

Functions of Combat; Service of Supply, circa 1945

Design for the ceiling of the Mary Harris Memorial Chapel, (pale ground) University of Exeter, 1956

Study for the Central Group of Allegory, c. 1929

Study for the Committee Room of the London Bankers Clearing House, 1958

Compositional study for The pleasures of Life at Morley College, 1928-30

Study for Man the Creator, circa 1932

Mural design for The Good Intent with Carlyle, Whistler and Stunners, Cremorne Gardens, 1935

Scenes from the Life of Christ: Preaching the Gospel, mid-1920s

Suggested Decoration for The Pleasures of Living mural, Shell Centre, circa 1961

The Printed Word Makes the People of the World One, mural for the entrance hall of Odham Press, London, 1935-36

Suggested Design for The Pleasure of Living, Shell Centre London Circa 1961

The British Restaurant at Acton, Middlesex, 1942

Man at WorkA Century of Technical and Social Progress, 1961

Mural I for the canteen of John D. Francis Ltd, Fazakerley, Liverpool, 1947

Study for Man at Work – a century of technical and social progress, 1961

Study for the Morley College mural

Allegory with female nudes, circa 1953