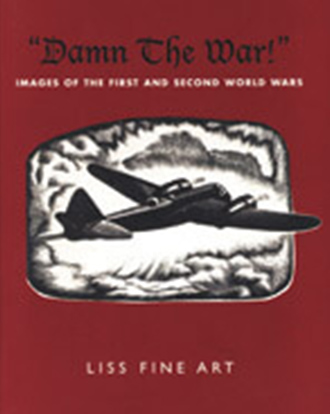 The paintings produced during both Wars represented a new departure: the aim was no longer to produce eulogies to heroic military leaders and national triumph. Rather, artists sought to portray the impact of war on society as a whole, in battle and on the home front their body of work providing a unique portrait of a nation in bloody conflict and social upheaval. The artists of both Wars adapted and directed their work towards national needs, recognising the importance of recording as well as responding to the events and individuals around them, often taking huge risks to create their works. Some paid with their lives. Eric Ravilious, death in 1942 was one of the great tragedies of the War Artists schemes.
The pictures reproduced in this catalogue capture the breadth of experience of civilian and military life. the national mood at home and the contrasting and varied responses to the two World Wars. They also provide a fascinating cross-section of artistic practice during two of the most critical periods in twentieth-century British history.

Phyllis Ginger
Design for a Wedgwood Plate, circa 1944
Sold

Helen Blair
Scene from the Book of Job, circa 1935

Gilbert Spencer
Portrait of a Soldier, circa 1940
Forthcoming

Gilbert Spencer
Darling, what have you done with my battledress?, 1941
Forthcoming

Charles Pears
The Mosquite and the Eagle: A Nazi seaplane drops a mine in the Fairway, circa 1941

German observation balloons recording the position of the Allied forces on the Somme
£6,950.00
Forthcoming

David Evans
War in the Air

Rudolf Sauter
Soldier (believed to be a self-portrait), 1939
Sold

Bert Thomas
Naval images of our Allies, circa 1914
Sold

Harold M. Brett
A Destroyer on a night time naval encounter, circa 1915

John Cecil Stephenson
Looking towards Highbury, city of London on fire in background… night of april 16, 1941

Dean Cornwell
Functions of Combat; Service of Supply, circa 1945

Claude Francis Barry
The Heart of the Empire: Our Finest Hour, 1940

Charles Mahoney
Ambleside, View from the Library Roof, circa 1942